﻿
The sailing the day before had only lasted for an hour or so before the wind had dropped off again and we were having to motor sail to get AR into Freshwater Bay. Now the anchor winch decided to go on strike again.
I feel that what had set off the non co-operation of the anchor winch this time was that the anchor chain had pilled itself up like a high hill inside the anchor well. It does this sometimes especially after a deep anchorage in which I have put out a lot of rode. When the long length of heavy chain comes up and into the anchor well it will often pile up and then, with the motion of the boat across the water once AR has moved on, that heavy pile of chain will fall down creating a big messy entanglement. Because of this entanglement the anchor chain gets stuck overloading the winch the next time I need to drop the anchor. The overloading causes the winch to grunt and then it stops altogether, going on strike.

MrJ and I had to play around with the winch some to get us settled at anchor but once AR was securely anchored in deepish water (11mt) with a sand, muddy bottom we dropped the covers to have a restful afternoon and evening. The other two boats came in not that long after AR.


Thursday 13th June 2013
Once again the exploring had to wait on the tide, this time a ¾ tide, before being able to go ashore. From where AR was at anchor I could not see the gap and short passage through the thick mangroves to the rock ledge and landing point. In our tinnie, MrJ and I had followed John and Barbara through the gap. Barbara had radioed telling us to keep to the left side, there was about 1 ½ mts of water but keep a keen eye out for any rocks. I was thinking, I’ll look out for crocs too! 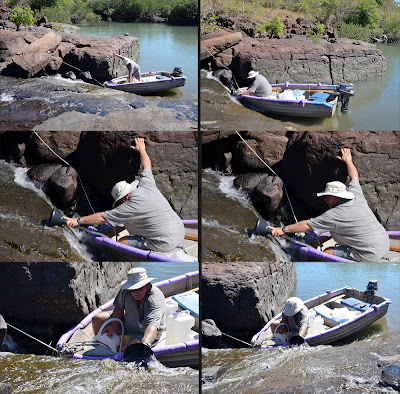 Peter and Shannon came along after I had climbed up the rock ledge and was already ashore. MrJ was still in the tinny by the small waterfall filling our freshwater containers. John and Barbara were enjoying a cool off in the refreshing running streams over the rocks.
Each boat company had brought morning tea supplies ashore which we had before taking a dip in the first small rock pool. By this time the tide had come in a little and the three tinnies were afloat in a little mangrove harbour. The others had told me about another slightly larger rock pool a little higher up that required our footwear to get to. It was not a hard or steep clamber over some rocks but the higher rock pool offered a little more safety in my mind from any local lizards that may be watching and who might have decided to join us in the lower rock pool. And then Peter mentioned the possibility of eels in between the underwater rocks! That was enough swimming for me! 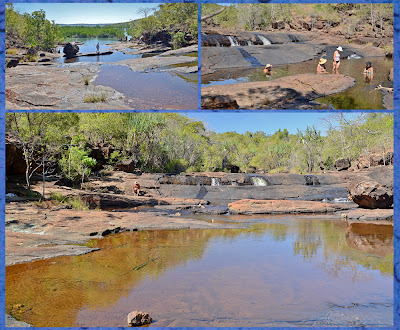 The surrounds were of a beautiful untouched bushland with a fast running stream cascading over small rock ledges, washing between larger rocks to form shallow rock pools and then to eventually wash into the salty water that was our little boat harbour, part of the hidden beauty of that part of Freshwater Bay. All around I could see little red dragon flies fluttering on their delicate wings. Some of the bushland was home to my old mates the green ants. I was able to get photos of the green ants but the red dragon flies eluded the camera lens.

Back on board AR, MrJ and I had some lunch and then we began the chore of dismantling the anchor winch motor. I really love those kinda jobs and I’m sure MrJ feels the same. MrJ had erected an awning lean-to to provide some shade from the scorching afternoon sun’s rays. Once we had everything dismantled and the winch motor out and on the cockpit table MrJ asked John to come over to take a look. John had more knowledge in that kinda area than MrJ and a second opinion is sometimes better. John and MrJ sorted the motor out, something to do with the brushes, something that we could not completely fix out in the wilderness but the touch-up would have to do. 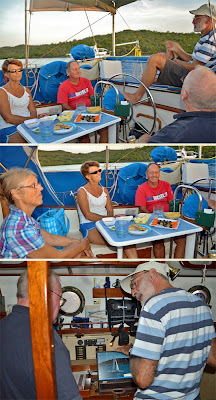 That evening we had sundowners on Tryphena. The ladies chattered about our different life styles on each different boat, the fellas were talking about more work/sailing and mechanical type things. How about that! Peter gave MrJ some assistance with a HF weather fax program. I did give Shannon some anchorages for further south from Broome to Exmouth. But most of all we were enjoying the great company of other boaties.

This was MrJ’s and my farewell to our fellow explorers as AR was to leave Freshwater Bay early the next morning.