The Old Campgrounds in Honeymoon Bay

Friday 7th June 2013
The Old Campgrounds in Honeymoon Bay
14’06.021S – 126’40.899E
Our next anchorage was just around the next bay, 3n/m away. The bay was named Honeymoon Bay, still part of Mission Bay and it had a small dry-season campground run by a fella named George. The guide books said that a fella named Les was the person to look out for but apparently he is no longer at the campground.

MrJ steers AR around the reef covered point and into Honeymoon Bay. As AR is motoring into the bay a tinny with three fishermen on board was heading out. They came close and one older fella, who I find out later, was that George and the other two younger fellas are George’s son Glen and his mate Barney, tells us of the rock reef close to AR’s STB side. MrJ turns the boat more to port and I thank the fishermen. We drop close to the beach at the campgrounds in 7mt of water near a high tide. A few hours later the fisherman return with their catch but it was late in the afternoon before MrJ and I went ashore.

The Honeymoon Bay campgrounds was little more than a few bush tin shed type awning construction set back on the side of a rough rocky incline, with bare flat ground beside these sheds to either park your camper, erect a few tents or use the inside of the sheds as part of your accommodation. At each shed there was a campfire area setup with three-star picket, steel poles to hang your billy from and some wire mess around for protection or you could build your own fireplace. Inside each shed there was a rough kitchen preparation area but the toilet and shower block was separate.


There was also rough tin and wooden beach shack closer to the beach that could be closed up if need be. This shack or hut had its own shower block behind which was also there for boating visitors as well but we had no need with our great showers on board. There was a little area out front of the hut for campfires and cooking outdoors. Further along the beach I came across the remains of old campfires that some people had built just off the beach and not too far away from one of the big Boab tree that populate this area. We could see other larger tin buildings which were set further back above the incline. 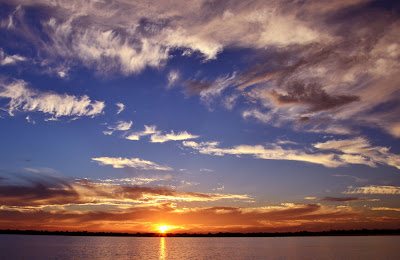 The next morning at the crack of dawn when the soft pink and blue colours are stretched across the sky, the boys go out fishing again. This time they came back with a payload of mackerel and show us before heading to shore. Well done! They also tell us that Glen and Barney would be going into town that morning; if we needed any supplies that we were welcome to come along for the drive. I did not need to be asked twice! After a quick tidy up I grabbed my backpack and two shopping bags.

﻿
MrJ grabbed three petrol containers to take with us. At the beach we met four campers at the hut. They were making a bush breakfast over their campfire. One of the campers, a German girl, Liza, offered to give MrJ and I a lift up the dirt road to George’s place. Later I found out that we could have walked up a rough track from the beach; it was all good, this way we were able to have a chit chat with Liza.
Up the top of the small rocky incline where the land flattens out there were three rough buildings in the large area; a large tin shed, a rough looking dwelling and a tidy dwelling up on metal stilts. 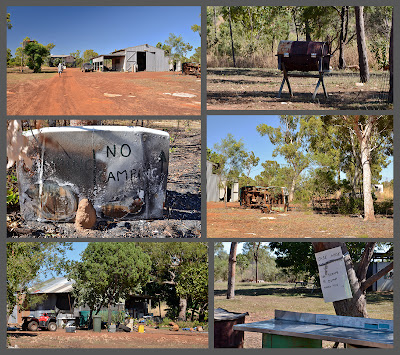 We were taken to the tin shed where we could see George still cutting up the fish.
There are no fences anywhere. Around the shed and in some parts of the grounds I could see bits of old rusting things. Except for the collection of just about everything that you could imagine, the campground is kept very tidy. Bins are provided for the rubbish which is taken by George on a quad bike to their own rubbish dump.
Between the campsite and the large shed there is a stainless steel fish cleaning table set up under a tree with signs attach for where to dispose of your leftover waste. No fish cleaning was done down on the beach, no fish or shell fish was thrown into the seawater as this would attract a local very large Salty that lived in the bay. No swimming either! 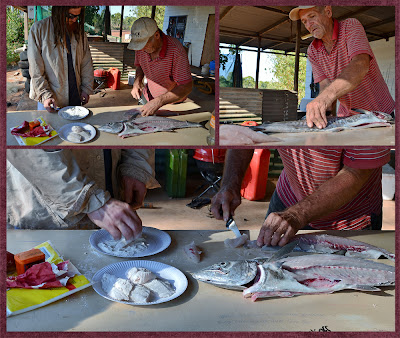 MrJ and I waited and watched George at work filleting and cutting up the morning’s catch while the two boys had their breakfast of fried fish. While we were chatting to George an aboriginal lady with a small girl came in; George introduced this lady as one of the traditional owners, name was Helen. We greet and shake hands.

Everyone was calling the little girl Roo (may have been a nickname). Roo was calling George dad. So there goes another interesting story that I would have loved to have known.
The boys finish their fish; we four hop into the four wheel drive with Glen at the wheel to head off down the dusty dirt road into Kalumburu about 30ks away.
Kalumburu Mission. (see next posting)
Sunday 9th June 2013
The Campers at Honeymoon Bay 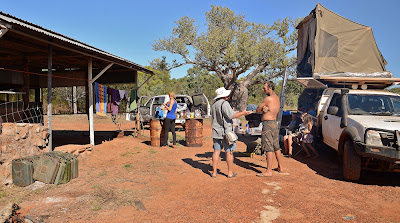 MrJ and I had our Sunday cooked breakfast, I did some letter writing and then we went ashore mid morning to stretch our legs. We walked up the beach to stop at the beach hut, stopped to talk to the campers at the beach shack while they were in the middle of making their morning food. I asked Liza nicely would she be able to post my letter at their next town stop. The answer was yes but Liza did say that the next town stop might not be for a week or so. To which I replied that a week or so was much better than a month or so before we were to get to Broome. Haha! Everyone found this remark kinda funny.

MrJ and I walked up through the campsite stopping next to chat more campers; a young couple with son Jack, a toddler not much older that my own grandson Jack. It was funny to run into these people with a little boy Jack on the very same day that I had been writing to family. This small family were local people from Kununurra, a small town between here and Wyndham out at Honeymoon Bay for a week long camping and fishing holiday. Brought back some fond old memories of the days that I used to go camping with all my kids!
I became very fond of the
Honeymoon Bay anchorage, with its very friendly people, the extreme rough bush setting and the lovely clean white sandy beach to walk along. The anchor was holding well in thick muddy sand, AR was sitting good in breezy conditions but we did feel that Mission Cove would have made the better anchorage in strong weather.
Posted by Nautical Nancy at 13:29