Over the Top of WA to Chimney Creek

Red in the morning is a sailor’s warning; once more the heavens spread a rich colour across the sky before and during the sunrise.
I surveyed our location; there were no signs of our dinner guest.
0650 MrJ and I were weighing anchor to begin our short passage around the northern tip of Western Australia, Cape Londonderry. It was another glorious morning with the promise of another great day’s sail although the wind was not in our favour for parts of the way. We had worked out what the tides were doing on both sides of the Cape, both very different and happening at different times.

0725 as AR was clearing the northern point another sailing boat came out of Glycosmis Bay, the next bay on. It was an Elite Tasman 37; Blue Bones from Wyndham, returning home after spend several weeks in the Kimberley’s. I spoke to them on the VHF channel 16 and the man behind the mike was able to tell me a little about the passage around the Cape. Keep close in he was saying it is of no use trying to go out to sea as the effect of the tidal flow goes out for maybe 50-60 even 100n/m at times. He also was saying that they had come around three days ago the day before the strong winds; it had been a little testy but Blue Bones did not get any green water over the bows. I thanked him and wish him a safe sail home and MrJ and I sailed on in a better frame of mind.

Our tidal calculations must have been fair accurate and the wind was in our favour, not much blowing as AR’s passage around the top was a good one. Not the horrific ride of the stories that other boaties had told us.


There was most certainly a marked difference in the sea action a definite line across the sea but the not the angry turbulence that we were expecting. AR rode through the sloppy mess beautifully! 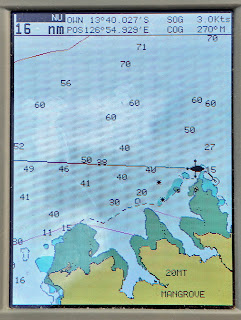 Besides the sloppy sea, the only other sign that was to indicate any major disturbance was the large amount of seaweed that we found float across the water. It was everywhere! The seaweed must have been ripped from its holding by the strong tidal actions in the area of Cape Londonderry and the many rocky reefs around the Stewart islands. MrJ and I had bring the trolling line in.

Continuing to follow the coastline around we were now heading in a SW direction until passing Cape Talbot then turning south still following the coastline till we came to an anchorage, marked by friends Ruth and Jock, at Chimney Creek (13’52.644S – 126’47.177E) where at 1650 we put down our anchor for the night.
MrJ and I were now officially on the western side of this great of Australia!