Saturday 8th June 2013
Hitched a Ride into Kalumburu Mission Town
The road was in pretty good condition for a bush track out to nowhere; we do pass many flood signs along the way but this year there had not been any flooding.


Kalumburu is a small community village out in the bush in far north W.A. It had many clean, tidy tin dwellings with probably a population of a couple of hundred people, no more. Kalumburu is run by the Catholic Mission, which move the people there in the early 1930’s from Pago. The Mission had a large fenced compound with the original buildings still being used. A main building with office, the church and other buildings which in one housed the museum with a huge collection of artefacts and native paintings, bits and pieces of old things from the past and old things that had been brought back from overseas trip that the original Father had made. Some of the other old buildings were the old hospital (no longer being used), the church and a recreational hall used by the local people. The grounds were well kept and surrounded by a high fence with an archway for the front gate.


Before doing taking the self guided tour of the Mission Glen pulled at the local fuel station; it was run by the Mission and the priest was the man to fill our tanks. A very nice young man who told us that his wife and child had gone back to the city after being out here for some months and that he still had another 14 months to go with his posting. His wife was not able to cope with the isolation. There were a few other older white people helping at the Mission; clerical work, nursing sisters and such.


We had our petrol drums filled and then went into the petrol station shop (a newer tin building) to pay by Efpos. In the shop there were some of the local people were waiting to be served. The shop had a few items on the shelves but what caught my attention was the sign to the side about ordering school lunches and school clothing. Very community orientated! 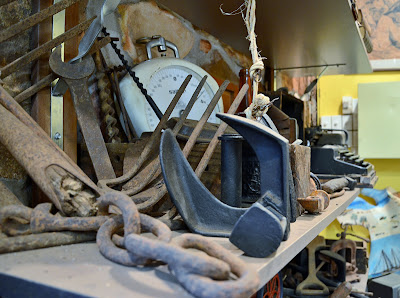 Next we took time to wander around the Mission compound. The main building near the front gate was constructed out of large stone bricks; the rest of the buildings including the church were of galvanised iron tin sheets and wooden frames sitting on concrete foundations. There was a nice green lawn in the middle of the compound with a big shady tree to sit under. Around the buildings there were some native and bushland garden features with dirt paths to take you between buildings. MrJ and I went into the museum first (we had to pay $5 per person) and then church. We also paid for the Glen and Barney to have a look in the museum. 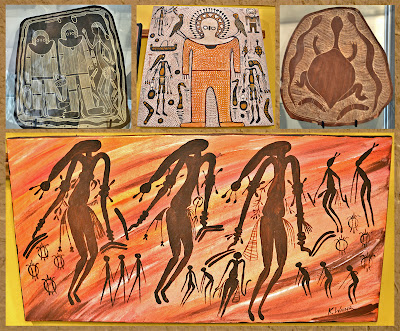 The museum was a most fascinating place. Just one large room packed full with all kinds of interesting stuff. Local people’s paintings and Boab tree nuts engraved, rock etchings and carvings, old time things from WWII, some of the old original stuff that was from the old Pago Mission had been brought up to the Mission. 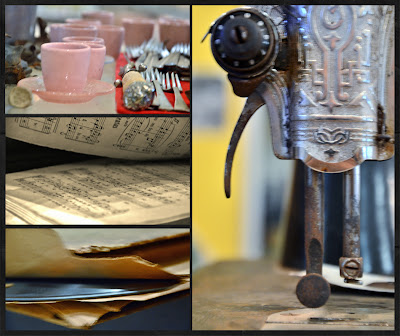 This included glass ware, crockery, old 33 records and player, sheet music, typewriters, kitchen utensils, work tools and even an old projector or film machine. There was also an extensive collection of religious items. I was fascinated with the collections old black and white photo.

One particular old WWII air force photo featuring a group of men; one of these men looked like my dad, it could have been him but I doubt it.

How strange it was to see the international collections; objects from all over the world. The sister that had taken MrJ and me to the museum had told us that the original priest had collected various things from all around the world as a teaching tool for the local people at the Mission; he believed that the people should know the work outside their own lands.

Inside the bush church were the usual pew seating, altar and a few well worn statues but that was about all that you would say was the same as any other church elsewhere. What made this place of worship unique were a few other things. Things like the huge tree stump for the pulpit, the huge tree knot for the christening bath, small tree knots for collection plates the mixture of traditional catholic art and tradition and not so traditional aboriginal art all blending together. How beautiful!
Across the dusty street was the general store and this was where we did a bit of shopping. Hahaha! Not the kinda shopping that you can do in a city. The general store called the Uraro Community Store sold just about everything but in small quantities and not a lot of variety. They had very little fresh vegetable, well not really all that fresh as everything had to be brought in by barge from Darwin once every two weeks. The packet of soup- mix vegies that I bought had been packed in Darwin, it was written on the tag, the bread labelled Bush Oven Outback Bread was made by Goodman Fielder in North Ryde in Sydney NSW and the frozen piece of steak had come from Alice Springs. A butcher in Alice must have had the meat contract. The bread had been in cold storage as with a lot of the items. It had reminded me of one of those old days corner store but maybe a little bigger and there was even an ATM machine in the corner. Money talks!

There were quite a lot of people in the store, browsing and buying, passing through the checkout that was operated by white people, probably more Mission staff. Shopping in a place like this give you a chance to mingle with the locals who are really very shy people but a little bit curious too. No one was too keen to hang around and talk too much, just a quick hello as they pass. I got lots of big smiles and cheery replies from the little kids and the older people as I would say good morning when passing. I came out with meat, bread and vegies, MrJ bought iced coffee and the boys bough a cold drink each and smokes.
﻿ 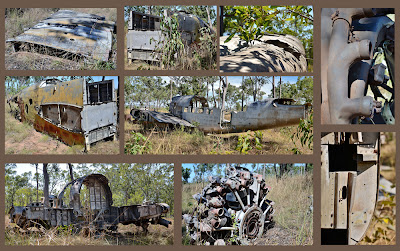 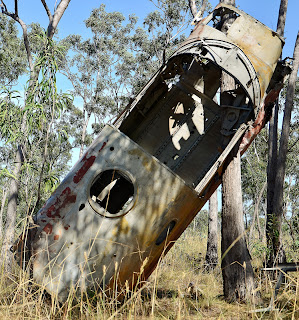 From the store Glen droves us back out of town to where the bush aircraft landing strip was, onto a rough bush track behind the airfield to where an old WWII DC3 place had crashed into the scrub.


The wreckage was still as it had been the day it had gone down except the rust had set in with the years and weather. 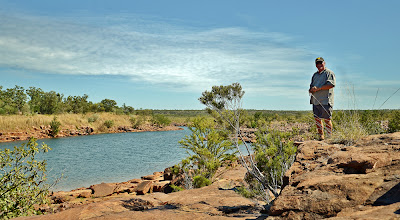 Our next stop was a small river gorge that was a great local barramundi fishing spot. Before heading back to Honeymoon Bay we had two more stops. 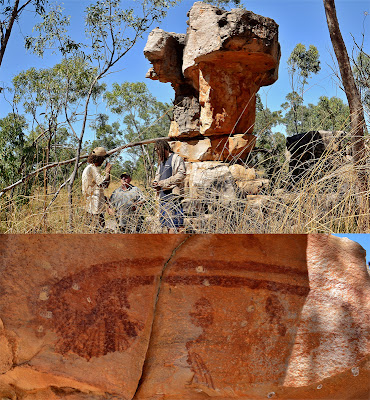 One along another rough bush track to a large rock outcrop that had a small bit of aboriginal art work stained into part of the rock face. The art work looked like a piece of Bradshaw work but I was not too sure what it actually was supposed to be. Our last stop was to call into the McGowan campground which was on the way back to Honeymoon Bay. 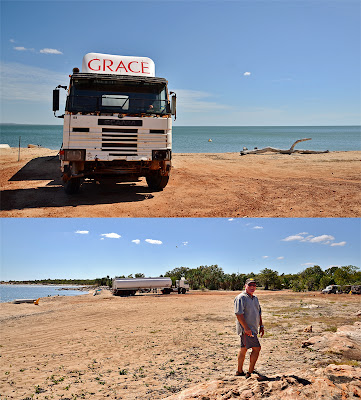 Glen wanted to say g’day to Robert, the tradition owner, this gave MrJ and I a great chance to have a sticky beak as we would be getting our diesel from McGowan in a couple more days. Honeymoon Bay and McGowan’s were the only road accessed campsites in Napier Broome Bay that we knew of and McGowan’s was a good place to get fuel.
Posted by Nautical Nancy at 23:39