It was the last quarter of the moon for the month of May which was giving us neap tides for a few days. It was time to be heading out, to be heading out of Darwin to begin the next leg of our big adventure around the block.
But I have said it before and I will say it again – I will not leave harbour to begin a passage on a Friday........................!!!
Saturday 18th May 2013
Always the last minutes rush!
Before pulling anchor on Darwin for the last time MrJ and I trek up to the fuel station in Fannie Bay for extra petrol for the old generator and splurge on one last iced coffee for it will be the last for some time. We say hello to the aboriginal ladies sitting on the corner by the old gaol, we pass a few Darwinites riding past on bikes; I had forgotten that it was the weekend, a Saturday morning, a day to be doing weekend stuff and here we were heading out. One day is the same as the other for me and they are all an adventure.
The time has come the walrus said..................
Covers in, everything stowed and the engines are running; the anchor is up and we are away, motoring out of Darwin Harbour.
I look back with the fond memories of the things we did the places we saw and the great people that befriended us still fresh in my mind. No sadness, happy to have been and done, happy to have made such great friendships and happy to be on the sea once more.
Before Alana Rose leaves the harbour MrJ and I set the sails and then head out past West Point through the shoals around Charles point and then on to Tapa Bay only 20n/m away. On the way out of the harbour we passed a couple of fishing boats moored out. I have a feeling that this is where the authorities keep the impounded boats that are hauled in. This is where we saw the illegal asylum seeker boat a few nights ago and now there are these fishing boats. Keeps um busy.....!

The passage had begun! The sailing is good with slight winds and gentle seas. I settled back on the cockpit cushion to start reading a new book – The Girl in the Steel capped Boots; about a young female engineer who is thrown into a job in the Pilbara. It is an interesting read letting me sink further into a world that waits as Alana Rose gently slices through the water and the miles go by.
Instead of going down into Bynoe Harbour our first night at anchored was to be in Tapa Bay. (S12-26-821 – E130-34-926)
I have been told that if the strong northerly winds kick in that Tapa Bay can get a fairly rough. One night’s sleep is all we need with no going ashore, just a simple stop-off. The anchorage was very comfortable due to the drop in wind and only a slight swell coming in from the sea. I was so please as I know what little sleep can be had in a bad anchorage. Somehow I already knew that I would need this sleep; I knew that the passage would get more strenuous as time went by. 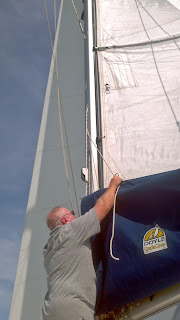 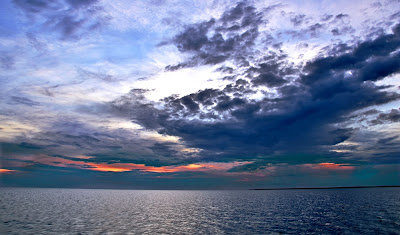 The wind picked up, the seas picked up and the clouds were spitting lighting all along the Daly River. I was hoping this storm was not heading our way. Luck was with us this time.