Our little company of explores had discussed the next plan of action over sundowners the evening before. John was to take his tinny with the bigger motor around to the NE beach, taking Barbara, Peter and Shannon with him. MrJ and I had decided to take the big boat, AR, to the NE beach to save on our ULP fuel. By the time we had negotiated the pearl string lines to get there John’s tinny was already heading into the beach. And so was a heap of the big black rubber duckies off the tour ship Orion. The Orion had come in to anchor that morning on its way back north again with a load of new passengers from Broome. Another tour ship, the True North, had left the bay yesterday. Busy little place and we soon found out why. MrJ and I had anchored in 13mts of water in a sand and coral sand bottom. (14’08.720S – 126’14.463E)
Jar Island had some of the most prolific and accessible Bradshaw Rock Art Paintings in this entire area. The whole island had been reported as being literally covered with rock art, it was just a matter of being able to find it. Someone or ones had certainly discovered three main sites, called galleries, in from the NE beach and now there was a well worn track for tourist and cruising boaties alike.
By the time MrJ and I had arrived at our own expedition little campsite the larger campsite for the Orion had already been set up with a shade awning and all. Our little camp was just a couple of bags in a shady spot against the high rocks at the western end of the beach and this is where our group stopped to enjoy our prepacked morning tea before tackling the easy hike and not so hard rock climb to the galleries.


There were three gallery sites in from the beach, as I have already said, with well worn trails to follow. Our group took our time, in between waiting for groups of tourists coming and going from the different galleries; taking time to sit in the shade or talk with some of the tourists. We were given information of where some hailed from and what the ships plan was but more to the tourist’s interests was the information about us that was the main topic of conversation. In between these little chit-chats we were also fortunate to be in on some of the talks from the tour guides enabling me to find out some of the most interesting stuff about the Bradshaw Rock Art Paints and their history.


The early paintings are extremely old; 60,000 years or probably much more according to anthropologists, but their absolute age cannot be determined as the iron oxide pigments have lithified, mineralogically assimilated into the rock to become part of the rock itself rather than a surface covering. If they are as old as they appear to be, chronologically they would predate the pyramids of Egypt and the Palaeolithic cave paintings of Europe; in fact they may well be the oldest art form of mankind in existence. The broad-shouldered, realistic representation of humans infers an origin of Egyptian culture in the Kimberley Ranges, while the slanted prolific features of the human face, reminiscent of Mayan pictures, suggest that the Kimberley Ranges may have been the cradle of all pyramidal cultures. The Bradshaw Paintings differ in style from and, by archaeological evidence, appear to predate the art work of the ancestors of the Australian Aboriginal tribes of the Kimberley region, whose history goes back to about 40,000 years. Some scientists believe the figures were created by a race that populated the area long before the Aborigines migrated to Australia. 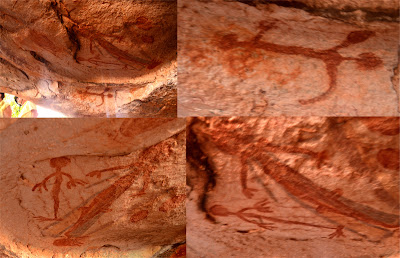 They point out that the Aborigines' stature does not show even a remote match with the graceful homo-form of slender Bradshaw figures, and therefore they could not have possibly been the subject of Bradshaw figures. The Aborigines of Kimberley region at one time supported this notion.
Since the late 19th Century until recent times, their elders stated that the Bradshaw images were before their time and referred to them as rubbish paintings. According to Aboriginal legend, the Bradshaw images were painted by birds that pecked the rocks until their beaks bled, and then painted the images with their tail feathers. In recent years some Australian Aboriginal communities have had a change of heart, laying cultural claim to the Bradshaw Images in support of land claims involving the Kimberley region. 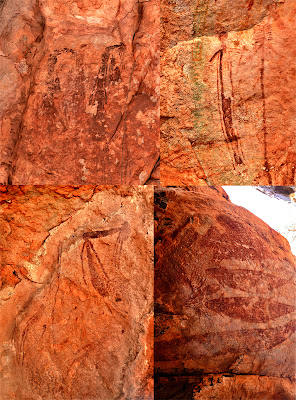 Anthropologist GL Seymour M.Sc had observed that the early Bradshaw images are depicted with representation of abundant plant material that suggests the Bradshaw People lived in a relatively lush environment in sharp contrast with the present hostile and desolate conditions of the region. As the Bradshaw Paintings progressed in time they displayed a distinct trend of decline into barbarism. The decline is noticeable in artistic skills, composition, themes, motives and aesthetics. There is a noticeable increase in imperfect figures, and short stocky human forms appear together with the slender Bradshaw figures.
Both homo-forms are clad in the Bradshaw tradition. The finely choreographed graceful postures gradually transit into wielding of weapons. The cause of multilateral decline is seen in the emergence of an external pressure, infiltration, inherent internal decay and eventual annexation by barbaric and warring new comers, probably the earliest wave of invasion (from the Indian sub-continent) by what is referred to as the Australian Aborigine. Such a quiet conquest infers the Bradshaw People were peaceful and hospitable, unaccustomed to deceit. Seymour surmised that the invaders eventually overtook the rule and overwrote the sophisticated culture, concluding that what the British did to the Aborigines, they themselves appear to have done to the Bradshaw People upon their arrival in Australia. Although the Bradshaw Pictures are timeless, the culture which created them was not, according to Seymour. They had their beginning. 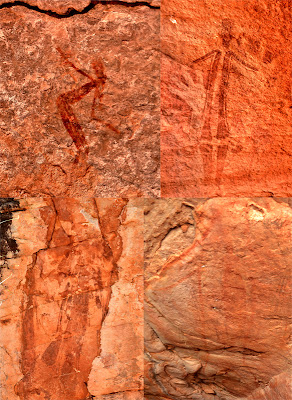 The Bradshaw people displaced another culture of rock painting or philosophy as evidenced by abundant cupules (chipped pits), which cover large sections of rock surfaces. The cupules predate the Bradshaw pictures and served probably to obliterate previous rock paintings that the Bradshaw people may have perceived pagan or undesirable to their own spirituality and culture. Sensitivity to the old apparently diminished with time; Bradshaw figures were painted over the old. Interestingly enough, the Bradshaw’s displaced another advanced culture with sophisticated and realistic painting tradition. According to Seymour, from the decay of old, the Aboriginal Culture was born.
The elite of the unsophisticated Aborigines, which had evolved within the Bradshaw society, acquired the simple boomerang from the Bradshaw People (opposed to the double boomerang displayed on many Bradshaw Images), the woomera (a spear throwing aid) and basic graphics, paint making and painting. With the exception of introducing primitive rock carving (actually chipping and scratching into the decomposed rock surfaces), countless millennia passed without progressive modification of or addition to their learned skills. The early stage of human evolution is also reflected by the deterioration and eventual dissipation of Bradshaw culture, science and technology, which had fallen into the laps of Aborigines of the day. Aside from being extremely old, the Bradshaw paintings are very significant to world history because instead of depicting animals, they depict highly decorated humans and relatively advanced technology. They show people with tassels, hair adornments, and possibly clothing. 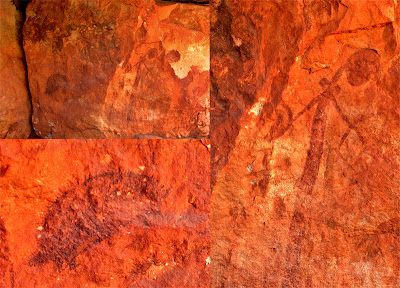 The art is very different from that created by the hunter gatherers living in the area at the time of European colonisation. The hunter gatherer paintings are known as Wandjina Paintings. Historical patterns also show residual civilisations regressing into tool making barbarism over the time, as in their memories, their former science and technology becomes reduced to lores of magic and might, which could explain the vagueness of the dreamtime stories of the Australian aborigines. Seymour believed that there was an ancestry to the Egyptian and American pyramidal cultures. What Seymour and others of the scientific community can't answer is what relationship, if any, was there between the Bradshaw figures and their near neighbours, the Wandjina Paintings. The Bradshaw’s are not only distinctly different to each other; they both also have little in common with other Australian rock art. Until now!


In the second gallery in from the NE Beach of Jar Island there are two distinct figures not too far from each other, almost side by side on the same rock overhang. The first figure is very traditionally a Bradshaw (Gwion, Gwion) figure; the second figure had the body and adornments of the Bradshaw’s but had the head of the of the Wandjinas paintings. So maybe there was the link?
Interestingly, the local Aborigines now claim that it was the Wandjina who created the Bradshaw art. Who is right? No one really knows!

From the climb down the rock trail I could see that the wind had changed, AR and Orion were no facing way from the beach, facing out into the bay towards the ENE and the waters all around had become very sloppy. MrJ and I had to get back to the tinnies which was washed up and getting pummelled by the wavelets against the shore and back to AR before the sea condition worsened. Everything in the tinny was wet from the splashing waves. Back safely on board AR we pulled up the anchor and sailed out heading for Freshwater Bay on the NW side of Vansittart Bay.