Moving On – Leaving the King George River - Into Seahorse Bay

Sunday 2nd June 2013
Moving On – We Leave the King George River
The bug clean up of the cockpit was only half the job as the morning before. It was Sunday morning and the morning for our bacon and eggs big Sunday breakfast, and I was lucky enough to get a double yoker. Yummo!


I had been having trouble with the old gas stove in the galley, a problem with the lighting of the hot plate at times or the lighting of the grill at other times. This morning it was the grill that would not light and I had to once more devise a way of cooking toast on the top gas hot plate without the use of a bought stove-top toaster. I had turned the gas down than places a steel trivet over the low flame as a place to put the bread and then cooked one piece of bread at a time. Slow going but at least we had toast with our breakfast. ;o)


After breakfast MrJ and I lowered the tinny and then standing in the tinny MrJ sprayed AR’s waterline with some bleach to try and kill the build up of moss growth on the hulls that was still regrowing since the marina in Darwin. I had seen a lady in the marina using a bucket with some bleach, detergent and water mix, to clean her boat’s waterline of the moss build up. Of course this had been done in a controlled environment not out on a natural waterway. Time will tell if the bleach does work.
As the tinny was in the water MrJ and I decided to go and check out the remains of yesterday’s burn off and found that nothing was left unburnt. We did manage to find the famous BBQ Beach; it was on the downstream side of the Croc creek just across from where AR was anchored. We could not see it from the boat as it was completely surrounded by thick mangrove trees but from the tinny MrJ and I could see a small gap in the dense growth where a small boat could get through, which we did but I was not for going ashore as the tide was coming in and the small hole would be closed in and there was also the thought of the 3mt croc still fresh in my mind. Chicken, I know!
0920 - MrJ and I up anchor to move AR further down river, thinking that it would be better to be as close as possible to the mouth of the river to be able to get a better idea of the tides. While motoring down river we have a discussion about tide times, depths and when would be the best time to cross the sand bar in the mouth. It is neep tides, meaning that the tidal difference is not that great; the King George River and Koolama Bay do not have the big tidal differences like the rest of the Kimberley’s in the west and we knew that we would need 2mts at high water to be able to get out. I looked at the tide charts and MrJ was checking his IPad chart/tide planner. The days were limited for a crossing but for today and it looked like we would have been stuck in the river for another week. We had to cross today!
The tide was coming in but still 2 hours before the high when we had the decision to head out, knowing that it would take us some time to get to the mouth. Just past Ron’s anchorage and the fork to the eastern side creek, we came upon another boat, a sloop, coming the other way. I managed to get this boat, Tryphena, on the VHF radio; it had just come in over the sand bar with 1.6mts under its bottom. We knew that we could do a crossing and it certainly made me feel a lot better. MrJ said that it was approximately an hour before the high tide. 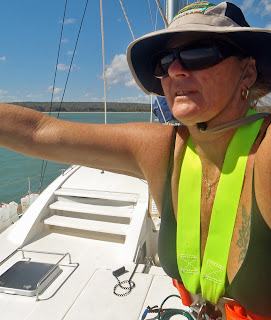 MrJ was at the helm keeping a very close eye on the chart plotter with our track in. I was standing on the upside down lashed down dinghy on AR’s port bow, hanging onto the furled genoa with my safety harness on and it attached to the genoa sheet as a spotter. I was also wearing my Polarised sunnies as a visual aid but nothing was of any use; the water was too murky to see a damned thing let alone spot a channel through the sand bar. I was not too impressed, my nerves were tight!

I Be Not Liking Shallow Waters – Into Seahorse Bay
After a nerve racking (for me) crossing the sandbar at the mouth of the King George River in safety, 1050 MrJ and I were anchored in Koolama Bay. (13'55.375S - 127'19.432E) We did not anchor where we had before going into the river, this time we were anchored further along towards the eastern point, somewhere near where the large tourist was anchored. Relaxing at anchor we again, before and during lunch, discussed the tidal currents and what would be favourable for us and our next run.
Most tides are presented as four tides in a 24hr period, two high tide and two low tide readings. In this particular area and other parts of the east Kimberley the tides tend to be two main tides in 24hrs, one big high and one big low depending on the moon phase. The other two tide readings are so slight that they are of no real relevance, a low high and a high low, also depending on the moon phase. The sun and moon have a great effect on the tides with spring tides (big tides) usually occurring a day or two after full moon or new moon. Neap tides have a smaller range, occurring about a week after springs at the first and last quarters of the moon.
We were heading into neap tides which gave an advantage of a smaller tidal range and hopefully less tidal current at the middle tides to be able to get further west. MrJ and I were also discussing how far we would be able to travel each day before having to make a run for the top of Cape Londonderry, the further most northern point of Western Australia where the two strongest tides meet, the northern coast tide and the western coast tide. Both coastal tides floods (come in) down the coast and ebb (go out) up the coast and met at the top make huge turbulence in the sea close to land and the many reefs at the top. For AR to pass around this point, Cape Londonderry, safely MrJ and I need to be there around a slack tide at the end of ebb to catch the flow out of this area of the northern coast and then catch the flooding tide to begin our run down the western coast, with no guarantees.
MrJ and I had been constantly listening to the weather that was broadcasted over the HF radio from W.A. According to the weather report there was a high going into the Australian Bight which was creating a trough up the western and eastern coasts, causing high winds and weather problem preceding it. These high wind warning were made for the Western Kimberley’s and the Gulf of Carpentaria  for two days, which meant that the winds for this area would be fairly strong too. What is that old Darwinite saying? A high in the Bight brings strong winds and bad seas in the Joseph Bonaparte Gulf and Koolama Bay is really still in part of the NW Gulf.
What to do; go or stay?
If we stay were we losing our chance to get around the Cape in daylight hours as the tide changes were getting to be more during the night hours? If we go where do we go to and how long would it take to get there? All this stuff to weigh up!
We looked at the charts, looked at what anchorage were a possibility and saw that there were several possible bays to anchor in before Cape Londonderry. We did decide to move but not to try to go too far; we took the outgoing tidal current to an unnamed bay some 12n/m along the coast. This bay, called Sea Horse Bay by Ron and Barbara looked like that it might give the better protection from any nasty weather. We hoped!
Ron had marked a rough pencil track on one of our charts, not to be taken as gospel, but to be used just as a guide to where we may have been able to go. We had passed what is known as Faraway Bay, the next small bay past Koolama where there is a wilderness resort or something. We could see building and a motor boat down on the western side. Also in the eastern bay we could see Dharma anchored. Ron’s pencil mark track leads AR between the main land and an island off the eastern point into Sea Horse Bay where there were two anchorages. These bays are marked on the charts as being unsurveyed! MrJ steers AR very cautiously. The water beneath AR’s hulls was reading as 16-13mts and then it would go very shallow, very fast and my heart would pound as MrJ would give all his strength and wits to pull AR up and reverse out and then to go a bit closer to the island. It looked like there was a giant sand spit shoaling way out from the sandy beach on the mainland point. There had to be a channel through and it was possible closer to the island and not through the middle. It had to have been there or Ron would not have marked the passage through.
My heart was racing, fear had gripped my stomach. Silly me! The stress of us possibly running aground in uncharted waters did not sitting well with me but I kept reminding myself that MrJ would not let us down. MrJ did get AR through, he had experience a lot of stress too, I didn’t have a heart attack and we all survived to anchor just around the corner in Sea Horse Bay (13’55.208S – 127’09.239E) just in time to see a beautiful sunset. I was feeling much better!