Posted by Nautical Nancy at 10:13 No comments: Links to this post

The Graves of King Sound 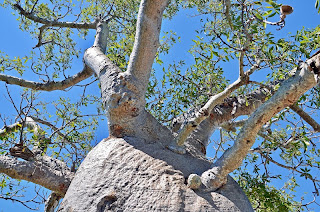 MrJ and I did not go down into King Sound proper; it extends 60nm south east to the township of Derby. Derby has the unique distinction of having the highest tides in Australia. Derby was founded in 1883 at the mouth of the Fitzroy River and is a centre for the west Kimberley. It was the first town to be settled in the Kimberley. The Royal Flying Doctor Service commenced here in 1934. The Aborigine Jandamarra, also known as Pigeon, led a resistance group against the encroachment of tribal lands by Europeans. He was finally tracked down and killed near Tunnel Creek in 1897. The infamous Prison Boab Tree still stands 7km south of town as a reflection of this time. Aboriginal prisoners were chained here en route to the Derby Lockup.

The bay and inlets entrances of King Sound are deep and the tidal streams are very strong. Phillip Parker King experienced these in his survey work. Tidal flows can be up to 10kn and most craft operate only near slack tide. We took AR through the islands of Buccaneer Archipelago, into Strickland Bay, also part of the archipelago, across the Sunday Strait at the top of King Sound, stopping at Sunday Island and then around Cape Leveque on the Dampier Peninsular before the final run down to Broome.
Wednesday 10th July 2013
Buccaneer Archipelago – Dampier’s Monument and Edeline Islands in Strickland Bay 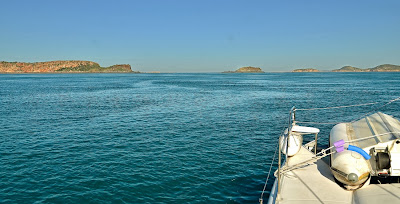 After our radio sked with the SICYC MrJ and I leave the Coppermine Creek anchorage heading straight out in a NW direction, catching the outgoing tide, heading towards the northern islands of the Buccaneer Archipelago. It was motor all the way with none to little wind blowing. We had no intention of anchoring at any of these islands; between the islands the bottom shelves steeply in places, which would necessitate a bit of searching for suitable anchoring depths. The bays had lots of submerged rock hazards and drying reefs joined a number of the islets. Much of the bottom was reported as coffee rock and of doubtful holding.
I wanted to take a closer look at these rocky islands as well as going right past the Dampier’s Monument, a small island in the middle of the northern island chain, a mound of 86mts high towering up out of the sea bed above all those rocks. William Dampier had come through this area in 1688 aboard his ship the Roebuck, to discover and chart the western shoreline of what we now know as the southern continent of Australia. I found some of the other small rocky islands more fascinating with their spiky shale formation or their unusual shaped weather blow sandstone formations. 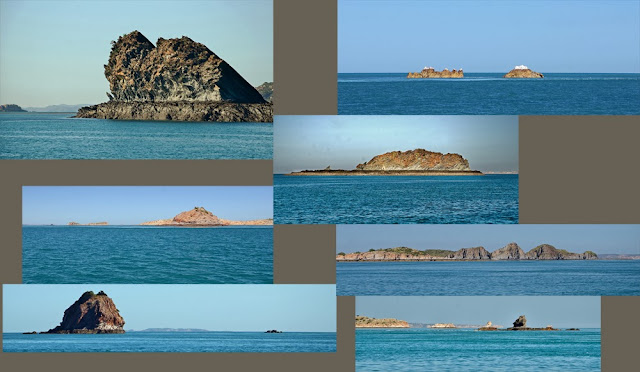 From Dampier’s Monument we turned SW out of the northern islands and then SE to follow the archipelago down to Strickland Bay at the southern end of the Buccaneer Archipelago. In the centre of Strickland Bay are the Edeline Islands. Here MrJ and I dropped the anchor in a big bay between the largest island, Edeline Island, and the southern island (16’22.298S – 123’35.805E). On the chartlets it was showing an extensive reef out from the southern point and a huge patch of shallow water further in to shore. 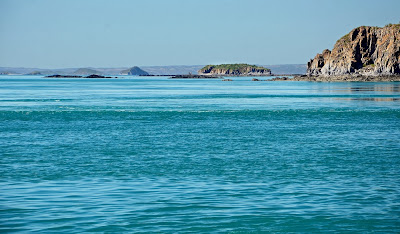 Because neither paper charts, chartlets nor electronic chart are always correct we use our depth sounder and eye sight to look for hazards and to our misfortune it was close to a high tide making the bottom hard to see. Instead of setting the anchor dragged across what seemed like rock; AR was in 14.5mts of water. MrJ had to haul the chain up; he was luck that I had only put down 35-40mts, for us to move AR further out to anchor again. This time the anchor set, we had 65mts of chain out! The anchorage was very calm, out of the tidal stream with no wind and no swell.
That afternoon I whiled away the time by writing blog notes and editing some of my many photos. MrJ had linked into the internet again and was checking emails, corresponding with a fella about our winch motor. I was dreading to find out the cost. When MrJ was finished I was also able to post some of my blog and do some emailing. I could hear the sound of small planes flying over or nearby and when I looked outside I could see a small sea plane in the sky. We must be in the flight path from Broome. The afternoon was now spent; it was now time for the day to fold for the sun to disappear behind the hill on the mainland.
Thursday 11th July 2013
Edeline Islands in Strickland Bay – The Pearler’s Graves 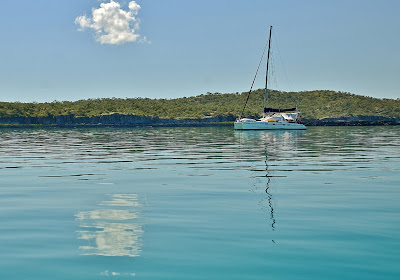 The HF radio was noisy again although MrJ did manage to get through. There was no internet service either, maybe the two go together? After breakfast I did hear the Maritime plane for the first time since we have been in the Kimberley. The call was very faint on Channel16, the plane’s radio operator was calling two boats; I felt that they could have been large ships off the coast. It was just the way they spoke to each other. 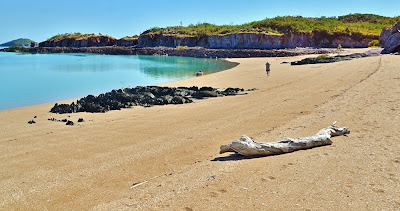 MrJ and I were at it again, fishing that is, trolling along in our tinnie not getting anything on the line. Maybe one day we will get it right! ;o))))))
We gave up the fishing for exploring on shore; a much better choice.

The Edeline Island anchorage is surrounds by the spiky shaped rock formation protruding out of the water as the tide drops. At HW most of them are totally covered by the sea so we hard to be very careful and keep a good lookout, even in our small tinnie. 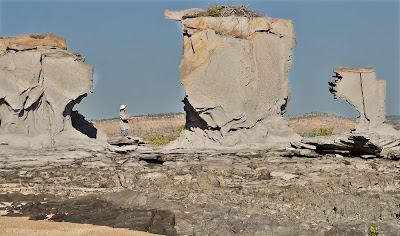 Directly in front of where we had anchored was a great sandy beach (on the southern island) with no obstructions to the shore. On the southern point there were very large uniquely weathered, shaped sandstone rocks. They looked like huge sculptures by the sea. These weathered shaped rocks were to be found all around. 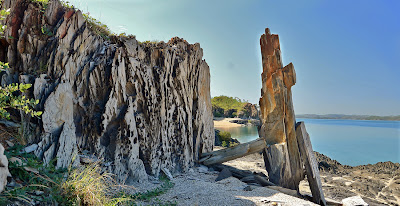 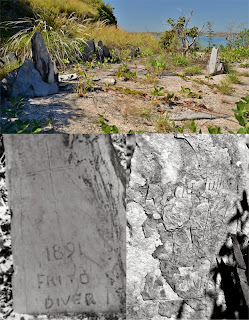 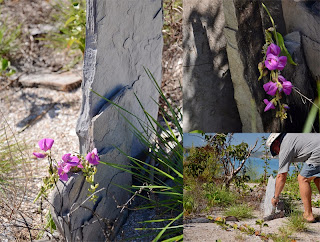 On this sandy part of the point we found five possible six graves, graves of the old pearl divers who had died either by drowning or suffering the bends while pearling in The Graveyard (The bay earned its name from the pearl divers who lost their lives there), a deep bay to the east of Edeline Islands. More graves may be found on the unnamed island in the south eastern corner of The Graveyard. 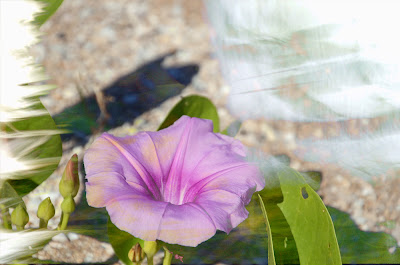 MrJ and I took a moment to reflect on the terrible hard lives of these people.

That afternoon a motor cat came into the bay to anchor. MrJ and I still enjoyed a peaceful evening as we watch the Moon and Venus disappear over the western horizon setting the night to darkness. I was feeling very relaxed and weary as I made my way down to the cabin for the night and then it happened.
I killed the Wi-fi...................................!!!
My little toe became tangled in the thin power cord and ripped it completely out of the end plug. Oh no...............!!! L
I was nearly in tears and had that sick feeling in my gut! It was now too dark and too late to be doing any repairs. MrJ and I just left the cord as is and went to bed.
Friday 12th July 23013
To Cape Leveque

As the sun rose up to greet the new day, MrJ resurrected the Wi-fi! Yay...............!!! ;o)))
0630 saw ALANA ROSE leave Edeline Islands heading NW, to sail back up through some of the island of the Bonaparte Archipelago before turning more westerly to set a course for Cape Leveque 30n/m across the top of King Sound.

At 0820 we were sailing between some un-named islands south of Shirley Island then at 0840 we passed between Margaret and Shirley Islands. Most of these numerous small islands of the Bonaparte Archipelago are made up from sandstone and basalt rock with white sandy beaches; all dotted on a blue turquoise sea. At this point ALANA ROSE was running with the tide but when we turned more to the west ALANA ROSE was now running across a very strong current. 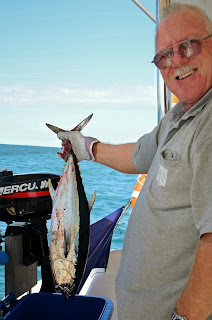 Somewhere around Saliers Island, near Gregory and High Islands, MrJ landed a fish; another Big Eyed Tuna. After MrJ took a couple of nice big fillets off I took the fillets inside and cut the flesh into eating size pieces. The smell of the raw fishy flesh and slime was making me feel sick. A job to be done quickly!
That night, while at anchor off the inside of Cape Leveque we didn’t go ashore but we had a big fish dinner.


Cape Leveque s the northernmost tip of the Dampier Peninsula in the Kimberley is a popular tourist destination, a favourite camping ground and a must to do for the caravaners and road travellers of the far NW coast.