The time has come the walrus said


This morning MrJ and I prepared to leave Darwin Harbour after having stayed a length of nearly eight months.


Many fine things we have done in Darwin


and we made some special friends during our stay.


To have endured a wet season on a boat couped up in a marina was a feat in itself.


To have met some wonderful people was most certainly the highlight of our stay.


But now has come the time to bid our fond farewell.


To be sure to meet another day somewhere further on down the track.


Time for us to go and play; go and play in the great wilderness region of the far north west of this wonderful land we call OZ.


Into the Kimberley’s we must go to seek new adventures and discover more fine places and people along the way.


So farewell I say but not goodbye, for there has to be many more stories to be told;

Posted by Nautical Nancy at 15:13 No comments: Links to this post

The past week, the lead-up to ALANA ROSE’s leaving the marina has been a hectic time for MrJ and me. All those thing that have to be done before you leave a marina after a long term stay, leaving for a long passage at sea; those things that cannot be done till just before you are leaving. Things like grease the track on the mast for the mainsail, hoist the radar reflector, service the engines, double check all pumps – bilge, water, toilet etc, gas lines, waterlines – grey, black and clear, test depth sounders, instruments, navigation lights and a heap of other things. 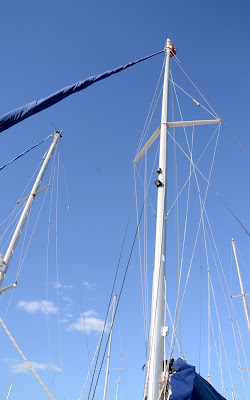 By going up the mast to hoist the reflector and grease the track MrJ and I discovered that the winch buttons or the winch its self was not working even though MrJ tested it the week before. I suppose dipping the 25kg anchor and a small amount of chain is not the same load as going up against gravity with a heavy person and through another winch first. Any way the load was the testing strain which did not pass the test taking a full day; the day before we left, to find and fix the problem. 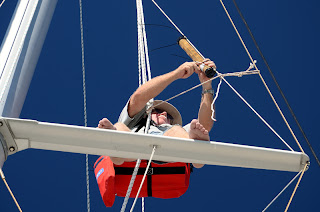 Somewhere in all that chaos MrJ had a hatch fall down on him scratching his nose and breaking his glasses? I have memories of a time long ago when a said person got knocked on the head and lost his glasses overboard. Thank goodness we always keep a spare pair or two on board and it was only a matter of getting the OPSM person to reshape the metal frame and put the glass back in today, the day after we dropped anchor in Fannie Bay. 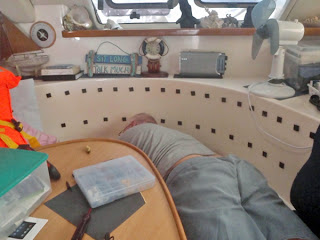 D-Day had arrived – Definitely getting outta here Day – but still we had not got our stored for the big trip. This was done on the morning of leaving at 0600h MrJ and I dinghied aver to Rob’s, picked up the ute, driving to Woolies in town to get two trolley full of supplies. Near $1200 later I was unpacking the four to six months worth of tin/dried/pkt/freezer food stuff on board. Oh, I didn’t forget the loo paper or the chocolate treats (sometimes they can be associated with each other if you eat too much of the latter). We already had six boxes of beer bought last week and picked up a case of red wine today. 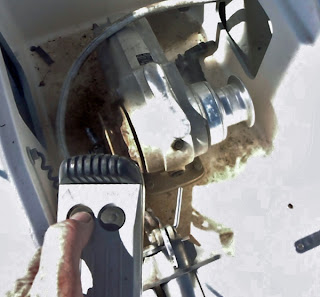 Everything in a mess but boat and us were ready to go. With three great mates, Rob, Ted and Matt on board to help get ALAN ROSE through the lock, we cast off lines and the power cords had been brought aboard. I have seen that happen too many times before where someone forgets to unplug their shore power before casting off. 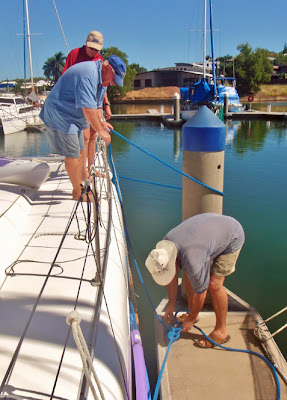 MrJ stirs the engines and out ALANA ROSE glides. Oh what a feeling! Free of the dock at last! Now for the lock we head and the dreading rises again in my tummy. There are the fender boards that MrJ made up place along the hulls as well as a few more make shift fenders made out of running line through the el-cheap-o swim noodles that you can by for next to nothing at the cheap-shops, a few flat fenders that Rob has lent us plus all the willing hands on board to get us through the lock jaws. I don’t know what I was worrying for, we made in through and out without any hassles. With no running tide inside the marina and it being the top of the tide outside in the creek made all the difference in the world to us entering the lock and getting out. Going out was much easier than coming in.
Once out all we had to do now was to drop the crew off at Dinah Beach YC wharf so that dear friend Desley, Ted’s wife could give the fellas a life home.
Well all plans work well on paper...........!


Getting into the dockside was not that hide on a high tide it was the fact that there were other boats alongside the pontoon and along the wall. What MrJ did was to turn ALANA ROSE around in the enclosed waters beside the wharf wall and sneak across to the end while going against the current, throw a couple of lines out that took two goes at doing and get the fellas off as quickly as possible before heading off and leaving me to pull all the boards, fenders and noodles in as we motored out of Sadgroves Creek into Darwin Harbour. By this time it would have been 1130h as ALANA ROSE passed Stokes Hill Wharf and the city of Darwin. It was breakfast for us on board, breakfast of a cup of tea and a banana, and about two litres of water.


MrJ and I anchored ALANA ROSE well off shore from the sailing club at Fannie Bay, with enough rode/chain to take the 7mt high tides and enough water still under us when the tide will drop to 1.42mts in a couple of days. We are safe in this spot for the next week or so before heading out into the wilds of the Kimberley Coast region.

The warm afternoon rolls on as we relax in the cockpit. The night draws near; the sun begins to set across the water in a glorious orange sky. I sit up forward   in the balmy evening weather with my best mate and the one I love dearly. 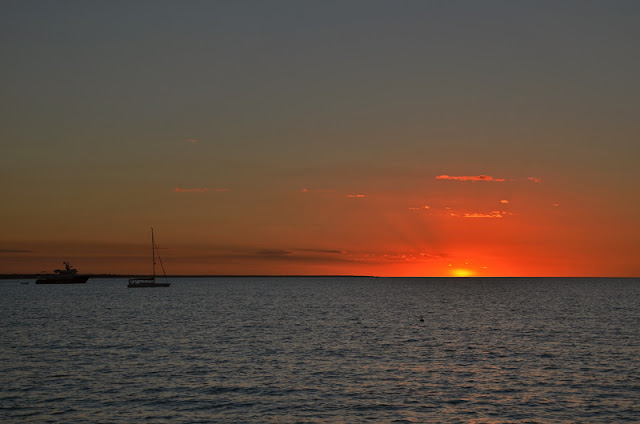 Our first sunset at anchor for 2013!
Posted by Nautical Nancy at 16:26 No comments: Links to this post