Saturday 25th May 2013
Freshwater Inlet and the Amphitheatre Falls – Berkeley River
After our morning breakfast of leftover chilli bean and toast then clean-up, MrJ and I took a ride in the tinny up stream. We were out for a look around and to see if there was any water coming from a freshwater stream/creek marked on the mud-maps. I was getting used to stepping in and out of the tinny and did not feel as if I was going to be tipped out.
The river widens here into its final 3n/m long reach running almost SW. About a half mile or so upstream from where we had anchored at Red Falls we passed the white rock that was also marked on our mud-map. The high rock wall banks of the Berkeley were reduced to about 3 or 4 metres in height.  Another half a mile further upstream, on the southern side we came across a side creek which proved to be the freshwater creek with its small water fall washing over the low, 4-6mt rocks. There was a small circular pool inside the low lying rocks for us to be able to get the tinny into. MrJ and I wedged the bow of the tinny between some rocks so that we were able to clamber out and up the rocks to secure a line before taking a look around.

There was a stream of rock pools of clear clean running water partially covered with lush green water lilies which had small white and yellow star flowers dotted everywhere. 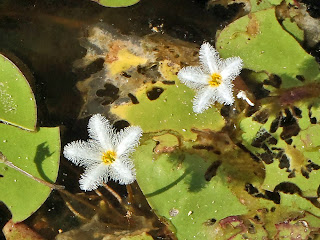 WOW..!
These rock pools surrounded by flat rocks and bushland stretched way off into the distance carrying the creek’s fresh water along to eventually flow over the falls.

﻿﻿ After a little exploring MrJ and I decided to fill our water bottles and return back to AR as the tide was going out very fast. This freshwater creek with its rock pool, its cascading water onto safe rock ledges would make a great place not only to get a good supply of fresh sweet water but to also shower, have a BBQ or to hike further up the creek or all of the above just as long as you got the tides right. 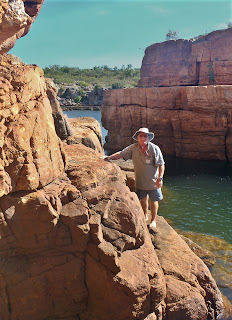 MrJ and I unload our newly acquired fresh water and get ready to weigh anchor to move a little further downstream to where we had seen another side creek and supposedly another amphitheatre falls. That’s when the anchor winch decided to start playing up again. Buggar...!!! With a little persuasion MrJ got the winch moving for me and off we go. But the winch had not finished with its temperamental state. We had to give it another manual nudge to drop anchor as well. Buggar...!!! Can't be liking this!

Amphitheatre Falls – 14’28.377S – 127’41.333E
This trip MrJ and I did not lift the tinny; instead we pulled it behind as we motored downstream. Once settled at anchor we took off in the tinny once more to explore this new creek. This particular side creek had a couple of sandbars at its entrance that would expose on a falling tide so we did not stay up there for very long. Long enough to see that there were no falls, no fresh water supply but beautiful scenery with surrounding high rock wall and maybe a good spot for fishing. Still no luck with the fishing! MrJ was telling me that our mate Leigh who had been through here last season and some other person had said that the fishing in the Berkeley was not real good. Well so far I think we have proved them right!
The afternoon rolls on, the tour boat from the resort goes past and those jellies have all gone.
It must be Saturday beer o'clock!
Posted by Nautical Nancy at 20:42