Saturday 1st June 2013-06-03
Inundated with Rubber Duckies - King George River
The clean-up of the bug fiasco the evening before was huge. Everything had to be stripped from the cockpit table and surrounding floor area. All floor mats inside and outside had to be shook out over the rail, all cushioned brushed down, the decks and floor swept and washed, the table washed and then everything put back. Not till all this was done that you could sit anywhere or doing anything in the cockpit. The clean-up was finished so we were able to up anchor to move downstream to a part in the river that was known as BBQ Beach (14’01.330S – 127’20.270E), not that I could see any beach, it was all covered by a dense growth of mangrove trees. MrJ was calling this anchorage Croc Creek as there was an inlet across from a sharp bend in the river where a 3mt croc had been reported in past years. MrJ and I also gave the top decks a wash down with the seawater hose. 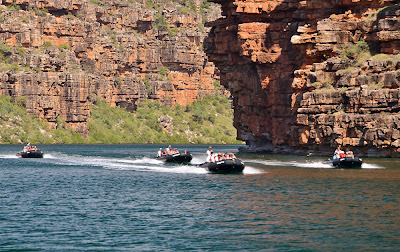 After breakfast four fast large black rubber dinghies loaded with people came roaring up the river. Noisy buggars! Two keep on their track up to the falls while two made a little detour into Croc Creek before continuing on to the falls. Later two more dinghies came up river and a covered in power launch and then four more dinghies roar by a few hours later. Not only noisy but their wake rocks AR.
Each dinghy had its own name, names like Neptune etc. Through the binoculars MrJ could see the name on the launch it was from the ship the Orion which we have seen before at Lizard Island last year. The Orion is an expensive tour ship, smaller than the P&O ships, operating around Australian waters and sometimes in the Maldives. The ship must have been anchored outside the river mouth in the Koolama Bay 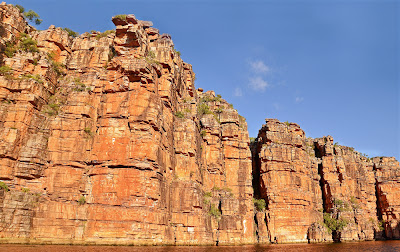 At lunchtime the noisy small craft roared back downstream to their mother vessel. Just before the sun was setting over the high gorge walls two more boats came back, to slow down just passed AR, maybe for the passengers to take photos of the sun on rock face and whatever else and then roars off again back to wench they came leaving MrJ and I to enjoy the peace and quiet of the river life. 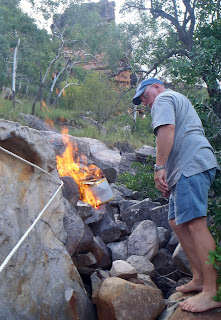 After lunch MrJ and I thought that we might try and find this so called beach, thinking that the beach might have been accessed from the Croc Creek. We take paper with us hoping to be able to make a campfire on the beach but could not find any beach so MrJ made a little camp fire between the rocks to burn our paper. While in the wilderness of the Kimberley’s we burnt our paper rubbish in campfires and I cut up and squashed all plastics etc into soda bottles for disposing of later down the track.


Earlier that afternoon I was busy fixing, by hand sewing, our insect netting for the saloon hatch, doorway. I did not get the chance to get my little sewing machine fixed in Darwin.
I had made a chicken Laska for dinner that night using some of the fresh herbs that I grow in small tube. When at anchor these planter tub sit on the back deck, when on passage I have to stow these tubs in the cockpit. Dinner was washed down with a cold beer.
Posted by Nautical Nancy at 23:58