Hiking Up to the Top of King George Falls


No radio sked today, AR is too well hidden behind the big cliffs the big red cliff that MrJ and I were to climb to the top of this day.
Before we could do anything or go anywhere, not even sit to enjoy our breakfast, I had to clean up the huge mess in the cockpit form all the dead and dying bugs from the evening before.
It was still early morning when MrJ and I go ashore. We head for the big rock scree (slide) about 100mts back from the western waterfall. MrJ wedges the bow of the tinny between some big rocks for me to be able to clamber ashore with the line and then MrJ secures the anchor and its line around the higher rocks. I dared to take a look to where we had to ascend, the climb did not look that bad from here but I was to find out different later. Each with a backpack strapped on, me with the little camera in my pocket with a tie line around my neck (good camera in the backpack), we set off in earnest with MrJ in the lead. 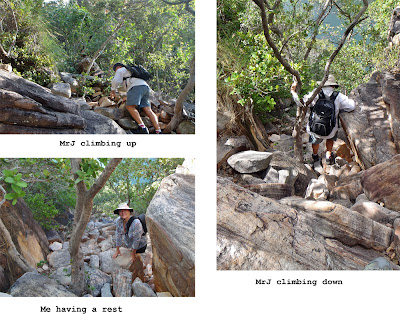 Some of the rocks were huge that we skirted around, most of the rocks that we had to scramble over were big and you had to grab either rock or where possible a tree branch to help haul yourself up. Where there were smaller rocks and rubble which were often loose, we had to be extra careful with our footing. At one time, one of the smaller rocks dislodged after me stepping on it; the second that I lifted my foot the two slightly bigger rocks above came down, one bashing me in the knee. No major damage, just a scrape, a bruise and a sore knee later that night. And I didn’t swear...! 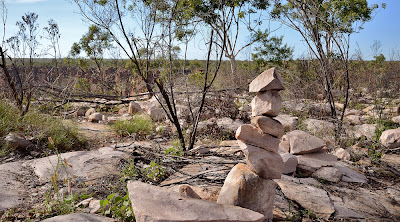 From the bottom of the climb and for some of the way up there were the familiar rock cairns to follow and where we could not see any MrJ and I made our own way up mostly on hands and feet type climbing, to come through the rocks, boulders and scrubby trees, to the top where we found more rock cairns. The track across the top of the cliffs was also in places marked with the rock cairns. A well used track! 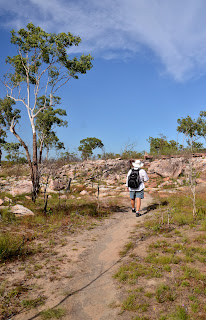 The track across the top was not so hard going; partly rocky and partly sand and solid dirt, not as hard as the trekking across the top at Casuarina Creek, in the Berkeley , which unlike here was all rock and had no solid dirt ground. Where there was solid ground you could see a well worn track curving through the sparse low lying scrub. I could see a great variety of pretty little wildflowers growing out of this dry land making a colourful display against the harsh dirt and rock background. 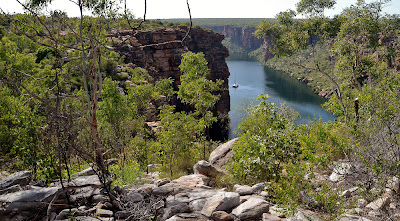 To be privileged to be the only people to what seemed like to me, to be at the top of the world, to see what we were seeing and feel the sense of the grandeur of this magnificent place will be imprinted in my memory forever. So much was it worth the stress and strain of the rock climb and the clambering down the huge rocks on hands and feet or on my bum for most of the time; so much was it worth all that and some more.

From the glorious views of the ravine at the cliff top MrJ and I made our way, guided by more rock cairns and pathways, to the rock pool and creek bed at the top of the western falls. MrJ and I scramble across the rock pools and through the creek’s rocky bed; going upstream a ways and across before deciding to head back. We were unable to get around to the eastern falls.

Between the numerous rock pools the clear water flowed strongly over and through the rock bed. The rock pools had no pretty lilies; they did have some plant life, grasses and small bushy vegetation around the edges and a lot of green slim in the water. No swimming for me!

MrJ and I were back down at the bottom of the climb, back down to earth with emotional feeling, back to the reality of our daily life and back to doing the basic survival chores.
After an almost bum slide down the rocks back to our tinny which was safely waiting for us just gently bobbing about on its anchor line, MrJ and I motored over to the eastern fall’s to fill more water bottles.

Our afternoon is filled with computer work or stretched out reading and resting as the wind increased to 15/20kts. It was also Friday night drinks on board while listening to my favourite CD, Cesaria Evora. We had a couple of cold beers each to quench our thirsts and then dinner, leftover chilli beans, with a glass of red for MrJ and a G&T for me. 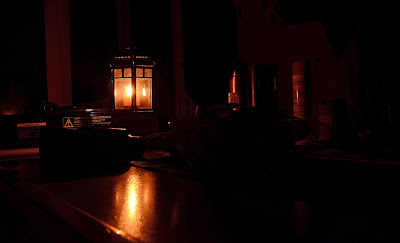 Being surround by lots of fresh water and vegetation as well as being enclose between the high wall has made our lights, even just a candle light (a repellent candle) so attractive to the bug life in this wilderness. The little Nat bugs are the worst; they crawl all over your skin. The feeling of creepy crawlies up my back is enough to drive me inside behind closed doors. The bug netting on the doorway had become unstuck, hence the doors closed. I was sitting in the dark trying to read by torch light and MrJ had gone to bed. It was all just too much, bugs on the torch light too. I gave in and went to bed too.
Posted by Nautical Nancy at 23:17