Thursday 6th June 2013
Chimney Creek to the Pago Mission – Mission Bay
The night at the Chimney Creek anchorage had been a peaceful one, no bugs nor crocs coming out to the boat. Oh, there were certainly crocs around; they all stayed out of sight. The landscape on the western side of Cape Londonderry was entirely different to the eastern side. The hills were much lower but just as rocky and there was more, low sandy beach areas. It was also the entrance to Napier Broome Bay.
0520 MrJ and I up anchored to catch part of the incoming tide down into Napier Broome Bay. We passed to the west of the Governor Islands due to the amount of uncharted reef between the islands and the mainland and then made our way down into Mission Bay to dropped anchor (7mts water HW) in Mission Cove near Pago (14’06.420S – 126’42.719E), the site of the old Benedictine Mission settlement.


MrJ and I dropped the tinny to go exploring on the high tide. We motored over to the far shoreline to a place where we thought that would be the other side of the extreme shoaling creek mouth. Starting from the thick mangrove lines point we made our way back along the shore in very shallow water skirting around a heap of looming rock reef to where the shallow sandy bottom was more prevalent and we found the gap through the mangrove that lead to a beach scattered with old rusting drums. This was the only guide that we had, was to look for the gap and the drums above the high water mark. The water was so shallow that I could have jumped out and wadder beside the tinny, but I didn’t. MrJ and I felt that it was best to come back on a lower tide so as not to leave us stranded waiting for the tide to come in with the tinny high and dry. The tide was at HW at 0900, the LW was at 1600; too long to be stranded in an unknown place, so we went back at 1500.


At this hour of the day the tide was near low and the water had receded a long way out with the shoaling sand. Leaving the tinny anchored way off shore MrJ and I walked the distance across the sand, through the mangrove gap, which was bigger than I had first thought, and up to the beach where I could now see the hundreds of old rusting drums. The heaped up piles of 44gal drums were not confined to the sandy beach area they were also strewn throughout the bushland and along the dirty sand track that lead from the beach.
Before tackling the deep soft sandy track MrJ and I put on our walking shoe but by the time I had returned along the sandy track my shoes were full of dirty sand making lumps and bumps between my feet and my shoes. But why didn’t keep my shoes off you may well be asking? Because #1 the sandy ground was too hot, #2 I did not want to be treading on anything in bear feet and #3 less to carry in case I needed to make a run for it. ;o) Which didn’t happen!

In 1906, the Benedictine monks from New Norcia set out on an expedition to find a suitable site for a mission in the eastern Kimberley. This initial survey concentrated on the area around the mouth of the Drysdale River and further inland near the junction with the Barton River. 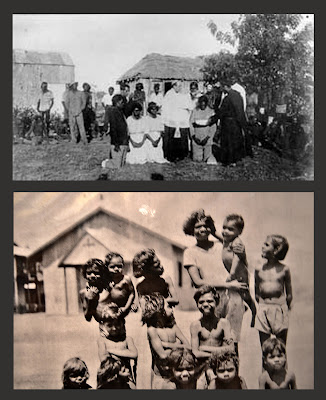 Two years later, the monks returned to the area and, due to several incidents with the local aborigines, established a temporary mission close to the sea at Pago. The Benedictine monks constructed a monastery and wells then established gardens, orchards and a mangrove grove beside a small creek in the south eastern corner of Mission Cove. Supplies were brought in from Wyndham to Mission Cove on the mission lugger "Valadora" and on W.A. state ships off-loading at Sir Graham Moore Island or in the outer part of Mission Bay. It took many years before the missionaries gained the trust of the aborigines, and Pago did not become a significant part of aboriginal life until the early 1920's with a population of around 400 people living there.
The poor soil, and limited water from the nearby creek and the wells, led the monks to explore the King Edward River area for a permanent mission site. After 31 years of struggle, it was decided to abandon the Pago site in 1939, and establish a new mission near a large permanent waterhole at Kalumburu, about 30 km south of Pago.
﻿

MrJ and I walked about 500 m south-east along the sandy road past the "campground" buildings which were destroyed by cyclone INGRID in March 2005. In the same location, where the old carriage wheels where on the side of the road there is now a newish built camp hut that looked like that it had been used fairly recently. There was also a solar powered microwave link antenna on the opposite side of the track.  After the hut we walked on a little further along the main track until we came to a junction of another smaller track going off to the left but no mango tree grove as the guide has indicated. Maybe the grass was too thick to find the trees. The grass was certainly too dense to do too much exploring but we did manage to find the ruins of the main mission building, what used to be the two story living quarters. All that was left was the floor of the building, made from local sintered shells (concrete), still in good condition and as the guide had said, the 100 year old wooden uprights were still standing. It must have been a very hard life for them.
Not wanting to be away from the tinny for too long as the tides was still going out, MrJ and I returned to the drum riddled beach via the same track. I was still not too relaxed about venturing across the wet shoaling sand; thoughts of some huge croc that would come charging out from the mangroves were going through my mind but all we saw and had to tread carefully to avoid squashing any were hundreds of tiny solider crabs darting for cover in front of our footsteps.
Safely back in the tinny which we did have to drag off the sand flat, MrJ and I made a hasty B-line for AR.