Tuesday 28th May 2013
Berkeley River to Koolama Bay
﻿ 0400 I was woken by the noisy banging and rattling of the anchor bridle; it is wind against tide and the tide is the stronger. I tried to bury my head under the pillow to get back to sleep but that does not work; the banging goes on. I know that MrJ is awake too, he has already been up to the loo and came back to bed but sleep was not happening for him either. We gave in to fall out of bed at 0430. Cuppa tea time! I go round closing up the small hatches in ready for leaving while we wait for the 0500 radio sked.
AR must have been facing the right way for a change or the skip was exceptional today as we could hear Andy’s voice way off in the distance, which was pretty good, seems that Andy was still in the marina in Manly Brisbane. Andy could hear us but we were unreadable. Wirraway came on the airway again, still in Pearl Bay heading for Island Head Creek. He said that we were booming into him. Oh, how exciting!!! Wirraway does get to relay our message to Andy about heading for the King George River before the skip starts to fade and the American boats from the Solomon’s come in over the top. At least now some one knows where we were!
0650; up comes the anchor and the winch is doing okay, I do hold my breath! 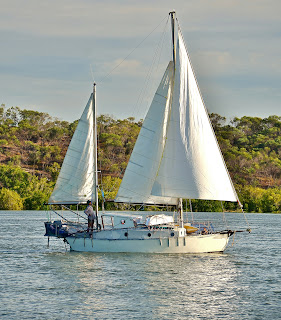 It was near the high tide as AR slips past the old ketch with all its sail flying, also heading out. I gave the old fella a big wave and say “good morning” as we pass. MrJ is following the way point that Ron gave us, leading AR back out the river mouth, over the sand bars and across to Reverley Island to follow the channel on the northern side of the island. I do notice that the old ketch has sail straight out of the river mouth and straight out over the sand bar only turn slightly north as he goes. I did think that this old fella must surely know his way around these waters.
The old ketch kept sailing closer to the land than we did; we prefer to be a little further out to sea in case there is anything not charted. It was a little bit lumpy, not big seas, small swell with conflicting wind waves and tidal flow.

I was feeling a bit heady so I took a tablet and had to go and have a lie down. MrJ said that I had been asleep for an hour when I surfaced again. Time for another cuppa!


The ketch sailed into Seaplane Bay and we keep going. Not long after this the sea conditions change for the worse. The tide must have changed or there was an anomaly around the area for the rough conditions only lasted for half an hour before abating. Checking on the chart we had passed the shoals and patches of shallow waters between Seaplane Bay and Cape Bernier where there would have been sand-waves but it did not get that bad through there. It was off the point between Cape Bernier and Cape Rulhieres that we got hit the worst. MrJ say that maybe when the tide changed it hit the sand-waves at the shallows like a brick wall and was bounced back. Whatever? Anyway I reckoned that old fella in the old ketch knew something; he just looked like a person from the sea and would know about all things about the sea and that is why he pulled into Seaplane Bay at lunchtime and not just to have a lunch stop. Will I ever find out?