Into the King George River

Wednesday 29th May 2013
Into the King George River

MrJ and I have mud maps from some people and guide notes from others, but here we were again, out in the tinny, before even having any breakfast, trying to find our way over the extreme shallow sand bars at the entrance to the King George River with our little portable depth sounder and Garmin chart plotter.

Most of the guide notes said to line the river mouth up with the lighthouse out on Leseuer Island which is out to sea out from Koolama Bay. There was little chance of us being able to see anything at all out to sea from the level at which the tinny was, especially something as important as a lighthouse on a dead flat island 8 or 9 nautical miles away. I did try using the binoculars without any success. We had got in to where the sandbar began but were unable to at that point in time to find a deep enough crossing.
﻿﻿ To our surprise as MrJ and I motored away from AR we spotted another boat, another large tourist vessel that was anchored just inside the bay, inside the eastern outside point. The tourist vessel, a large catamaran with a yellow helicopter on the top aft deck, was moving our way from its anchorage. It looked like it was intending to cross the sand bar to enter the river mouth. MrJ swung the dinghy around, back out to the deeper water as we watched the vessel approach. I could see the name down the side; Great Escape.
MrJ and I always carry the portable VHF radio so I was able to give     the Great Escape a call confirming that they were too about to enter the river mouth and that it was alright for us to follow in our tinny. The tourists on board gave us a big wave; I wonder what they thought. Lucky or crazy........???  A bit of both is what I would have said.
With a new line recorded on our chart plotter MrJ and I returned to AR and proceeded to make our own entrance into the King George River. The shallowest we came across was 2mt right at the sand bar, everywhere else was 3-4-5mts with supposably another two hours before the high tide at Leseuer Island. We were in!


Keeping AR to the right side of the river as we come in past the mouth to avoid the shoaling off the long mangrove section we motor upstream past medium high cliffs and more mangrove flat ground with depths from 3mt to 11mts of water under the boat until we came to a large pond in the river where another stream on the eastern side joined the main river.
From our mud maps and guide note we knew this was where everyone anchored but we decided to take up Ron and Barbara’s suggest and to go a little further around the next corner to another anchorage that they had favoured in Opal Shell. We named this anchorage Ron’s Anchorage (14’00.065S – 127’21.165E)  and it was a real good one at that. Ron’s Anchorage was in 6-7mts of water, protected from any strong south easterlies and supposed to a good fishing spot. MrJ and I dropped the anchor, the winch is working (so far so good), had breakfast and then hopped in the tinny to go exploring.
We went for our tinny ride up the nearby creek into another gorge that became very shallow around the mangroves and narrowed towards the end with high sided red cliff faces of the similar rock formation as in the Berkeley River only different. Was hard to explain! These rock cliffs had the similar building block pattern but of a darker stained rock in places and much more vegetation seeping through. 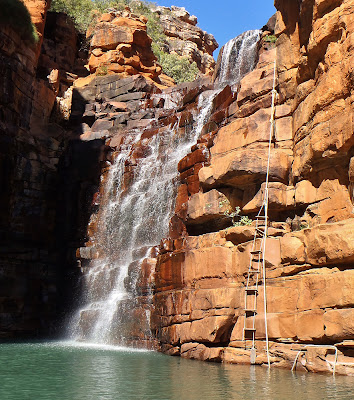 As we crept the tinny through the narrow gorge all I could think of was that there was reported in 2006 that there was a 3mt Salty living up here and how big would he be now. There was also supposed to be some fall at the end of the gorge but we were not able to see these falls until we were right in tight and almost at the end. And there they were some 25-30mts high, a narrow spray of steady water streaming down over the steep rock face into a deep pool at the bottom. And there was the rope that we had been told about, the rope to climb up the sheer rock face with, and a rope ladder to help do the same. Yeah right! Not for this little duckie! Where’s my sense of adventure you may well ask. I would if I could is what I say but I just make it to be able to scramble over rock screes not up rock walls! Where’s my mate Leigh, the rock wall and rope would be right up his alley.


Later that same day MrJ and I are found out in the tinny for a third time. This tinny thing is really getting to be a good thing. We were hoping to snag a fish for dinner by casting our lines around the mangrove areas and trolling past the rocky bits. 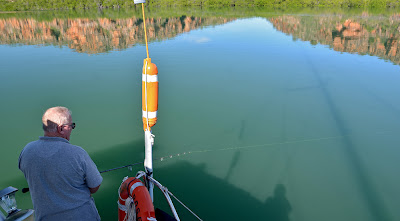 Alas, no fish!  Bangers and mash for dinner!
Posted by Nautical Nancy at 10:40