In the Berkeley River

Wednesday 22nd May 2013
In the Berkeley River

So much for the good night’s sleep!!!!
I was woken sometime during the night by the slapping of water on the hull, the sound of a noisy engine and a strong light through the hatch. There was a large motor boat to our stern, going round in circles searching for an anchorage. At daylight I saw that this motor boat was Kimberley Quest, a large tourist boat. It must have come into the river on the night’s high tide and the sloop had left. Not in any particular mood to be concerned it was back to bed for me and more sleep. MrJ did the same.
WST 0500h out of bed as it was now the new time for our SICYC HF radio sked, not that we have made contact with Andy at all but we were lucky enough to get onto Swarree II again. They were now at the top of Cape York getting ready to do the Gulf crossing to Gove. 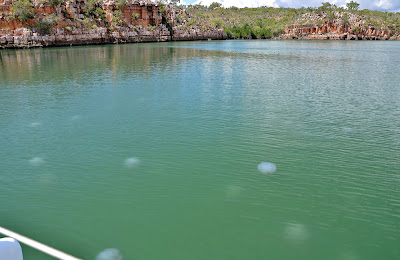 I stayed up to greeted by one of those magic sunrises on the still waters of the river. Another beautiful and fascinating thing was the sight of thousands of large jelly fish floating down stream, floating right past our boat. The first thing I thought of was, get photos for Livy, my granddaughter, as I knew that Livy was doing a school project on jelly fish. How bazaar!
I went up on deck to do some of my exercises, using the hard deck for standing exercises which are too hard to do at sea, and the softness of the tramps for floor workouts and stretching. There were a few mossies around and that means there will be sandflies too. I don’t feel the sandflies, MrJ does but it is the mossies that leave their mark on him. The sandflies can attack me with a vengeance and I don’t even know it, leaving me with great fester bites that soon turn to inflamed pussy sores. Horrible things!!! I was not too worried as I was covered with a thick layer, head to toe, of my homemade insect repellent.

Once breakfast was over, MrJ and I set to work changing the smaller boats over. All the gear was removed from the rubber duckie dinghy and left in the cockpit. Then we went up forward; taking all our strength to flip the larger tinny over making sure not to scratch the deck. MrJ had put some of the coloured noodle around the tunnies' rim. I had put down covers. With the use of several lines, the spare halyard and sheer strength (me on the winch and MrJ’s muscles) we raised the tinny over the side rail and lowered it into the water. Keeping the tinny tired alongside down the back; we next lowered the dinghy into the water from the davit. Keeping the dinghy on a long line MrJ and I manoeuvred the dinghy to the forward rail and reversed the hauling procedure, pulling the dinghy up on deck.
I did read one time in the boat Scarlett’s (Craig and Kerry) notes that Gavin, a mate of ours (referring to Gavin Le Sueur of a certain Multihull book fame) once said that it was a crime for a catamaran to carry a dinghy on its decks. Oh well, that was another rule broken!!!
MrJ and I still had the task of getting the large outboard motor onto the back of the tinny, using pullies and muscle power again, without the motor or anyone falling into the river. I just kept thinking, Croc Country!!!!!
It was a lot of hard work for a couple of old people (ha ha!) and the work was not over yet. The tinny with its load of outboard motor had to be hauled up onto the davit; none of this towing small boats behind for us.

While we were in the middle of all this heavy work the Kimberley Quest had already moved upstream and the UHF radio was blaring with more messages from the boat to the light plane, chopper and resort. Some people were on holidays; this was a way of life for us!
A couple of small tinnies from the tour boat were slowly making their way back along the river’s edge allowing the holiday maker some time at fishing, while I was pulling up the anchor getting ready to move off, to explore another part of this wonderful wilderness river.
Motoring in half a mile further we find the first large creek that is marked on out guide; it forks off to the right. MrJ and I kept going up river till we come to another, larger creek also forking off to the right, The Casuarina Creek which is 3n/m from inside the mouth of the river. Here we dropped the anchor in 10mt of water on the upstream side of the creek entrance under the protection of a huge red cliff face on the northern bank. And still the thousands of jelly fish are floating by. How amazing............!!!

I sat on the bow wearing my sun-gear for the short ride (1hour) up stream. 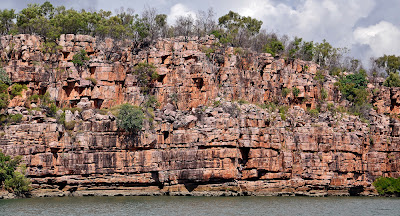 What a beautiful untouched part of the world! 30mt red rock wall that looks like an assembly of a jigsaw of sorts, just holding together like a Rubik’s cube; the green, green colours of the mangrove bushes/trees at the water’s edge; the grey, blue and green sometimes still, sometimes swirling waters of the river; the blue, blue sky with white puffy clouds floating all around and I have to mention them again – all the huge jelly fish just passing with time, all heading to the mouth and out of the river, all getting ready to go to sea, where-to from here goodness knows, but I bet that they will be back again next year.
We were surrounded by mangroves on the southern bank, which meant sandflies to me. I was wearing my homemade insect repellent which I so did hope that it would be working. As I was dropping the anchor I did happen to see something slip into the river waters from the muddy bank. I guess we had a neighbour!
Near Casuarina Creek - 14'23.579S - 127'43.707E

Another catamaran comes up the river, passing us to head for the river mouth- it was nearly high tide again. A few drops of rain began to fall as the clouds became greyer and closed in. It was afternoon rest for MrJ as I turned to my computer to keep me busy with writing and photo work.
The evening falls fast, bringing clearer skies and an illuminated moonlit night. Not yet a full moon even though the moon light lights up the whole waterway sending shimmering silver reflection off the water mixed in with the darkness of the shadow from the looming cliffs.
Posted by Nautical Nancy at 18:04