MrJ and I spent the day washing AR, inside and out, washing clothes, four large loads at the marina laundry and them washing ourselves; I spend at least 20mins under the shower at the marina. It is just heaven!
During the afternoon Ginny off OVERPROOF comes over to get some of the SICYC photos. I than realise just how many photo that I did take of the weekend event.


At 1700hs MrJ and I wandered over to have Sundowners with Trevor and Jan on Nefetiti. We have not seen Trevor and Jan since we had left Brisbane so the chit-chat and wine flowed well.

Mid-morning MrJ and I walk uptown to do some shopping and post some birthday cards.


I like to keep ahead of family birthdays; I don’t like to miss anybody. Happy Birthday, this month, to son-in-law Martin, girlfriend Eilleen and darling daughter Carla!

The history of Townsville goes back to 1770 when the city was first visited by the Europeans. Captain James Cook described the region on his first voyage around Australia and named it Cleveland Bay.
A number of maritime explorers stopped at Cleveland Bay after that. During the 1860s, a sea captain, Robert Towns asked John Melton Black to build a dock on the Cleveland Bay in the north Queensland coast. The settlement was named Townsville after him. Soon Townsville was declared a municipality, with John Melton Black as the first Mayor.
With the growing of sugar, the discovery of gold, the establishment of meat-works and the growth of pastoral industries in the hinterland the port of Townsville saw a booming growth in the history of Townsville .
Soon a railway was also built from the port which moved out into the hinterland reaching Charters Towers, Ravenswood, Hughenden, Winton, Cloncurry and Mount Isa.
The history of Townsville is marked by the early 1900s with the Australian Flag being hosted and proclaimed at a ceremony at Town Hall in Townsville. The ceremony was conducted by the first Governor-General of Australia, the Earl of Hopetoun. Soon afterwards, Townsville was declared a city under the 'Local Authorities Act'.
The history of Townsville is also marked by the world wars. During the World War I, the Townsville-based Kennedy Regiment was highly involved in the capture of Germany's Pacific colonies. During World War II Townsville was a major military base, accommodating up to 90,000 Australian, American and other allied service personnel. The City was bombed on three occasions by the Japanese and was used as a major offensive launching base during the battle of the Coral Sea.
Tropical storms have threatened the city of Townsville on many occasions one of which was a category 4four storm hitting on Christmas Eve in 1971 causing considerable damage, has found a notable place in the history of Townsville.
Located around 1400km from Brisbane, Townsville today is a city of great appeal, rich in history with many old builds still standing and warm in climate.

The Customs House, on the Strand opposite Anzac Park, was completed in 1902. It is rumoured that several tunnels, used in WWII, emanate from the building, one going to the nearby Queens Hotel.

The first timber Queens Hotel on The Strand opened on the current site in 1872. The present Indian colonial-style Queens Hotel building was constructed in stages from 1902 to the 1920s 1925 and was for many years the finest hotel in North Queensland. It was once visited by politicians and Governors but its importance declined after WWII. It is now used as offices. In recent times it has been the studios of Channel Ten but is now unfortunately empty.
﻿﻿﻿ 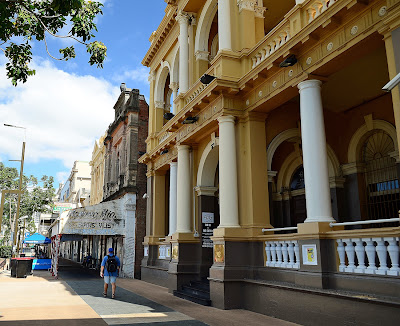 The Bank is probably the finest building on Flinders St East, which was the commercial centre of early Townsville. It used to be an actual bank (Australian Joint Stock Bank) when built in 1887 but is now The Bank Nite Club.

The former post office (now a brewery, restaurant and bar) was built as a double-storey, Victorian Classical-style building in 1886. A clock tower was added in 1889 and dismantled during WWII due to fears it would be a bombing target (the city was bombed for three days by the Japanese in 1942). A new clock tower was built in 1964. 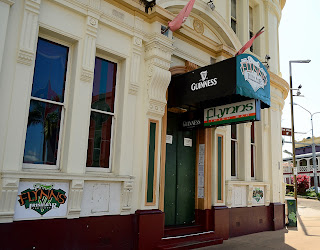 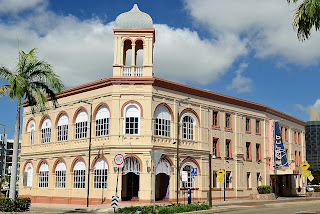 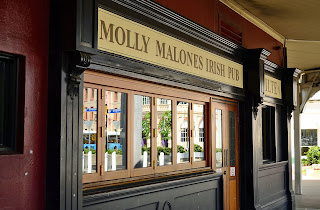 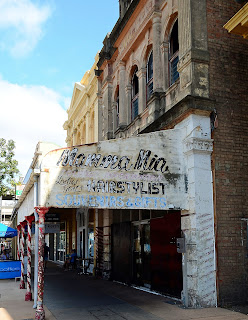 We get back to the boat with our shopping in my granny trolley and two backpacks, unpack, have lunch and then we are off again.

This time MrJ and I take the walk along the esplanade

through the parkland to Gregory Street;

cutting down Gregory Street to find the bottle shop.

Two cartons of beer and a couple of bottles of wine later finds us making our way back along the waterfront, 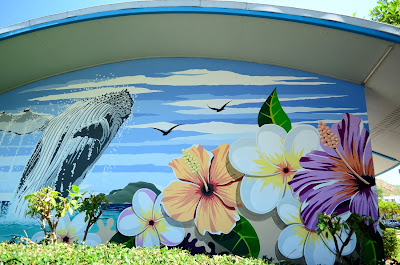 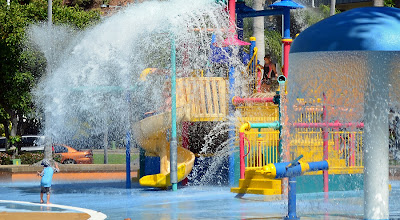 back to the marina and home.
Saturday 1st Sept

Sunrise, I am out on the break wall with the camera before the sun is up. There are a few birds and a couple of rock fishermen to keep me company.

After breakfast MrJ and I pack up AR, leave the marina and sail across to Magnetic Island. Ginny and Margaret are there on the marina dock to wave us off.