I woke up Wednesday morning to nothing but stillness and then the sound of the rain. The rain poured down and there was a blanket of mist covering the mountains of Hinchinbrook Island and the hills on the mainland; an early breakfast and we were away. 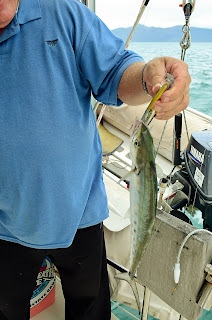 Sailing up the channel MrJ lost one of the lures on something big. I know – the one that got away story.....!!! I re-lured the line and we pulled in a Spotted Mackerel but the fish was under-sized so we have to through it back.
After leaving the Hinchinbrook Channel, it is still raining; we passed by the old Hinchinbrook Marina and the town of Cardwell, both of which had been hit severely by Cyclone Yasi last year. In the marina complex most of the buildings are still standing, badly damaged but the pontoons are gone and so are all the boats, just about all destroyed. The town of Cardwell has had some rebuilding and repairs; all of the big trees that had once lines the fore shore were washed away in the storm surge leaving the town exposed to the sea still. It took us 4 ½ hrs to sail/motor-sail from the anchorage in Sunday Creek to Dunk Island in fairly swelly seas and light misty rain, not good weather for going ashore so we stay on board till the following day when MrJ and I go and explore the cyclone damage on Dunk.


Dunk Island is the forgotten ground zero of the Category5 Cyclone Yasi that struck in February of last year between Townsville and Cairns. That's a bit over 18months ago. 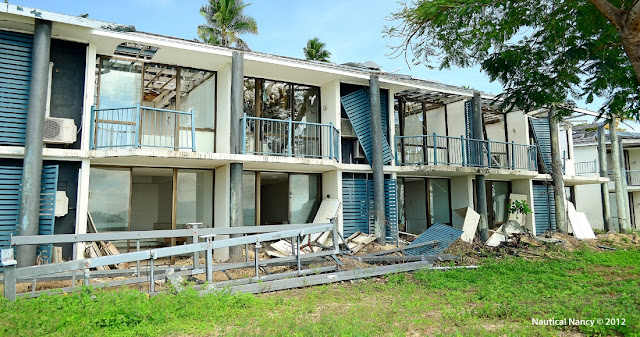 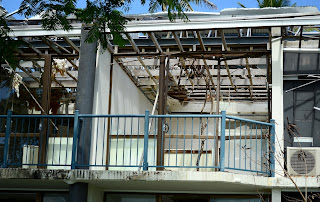 Yasi snapped steel, smashed glass, tore fans, blew out roofs, sheared rainforest, pummelled jetties and dumped sand everywhere when it ripped through the island at midnight before smashing into the mainland. 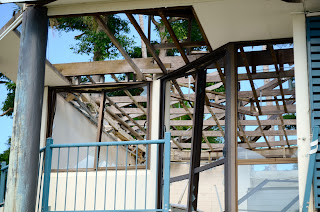 Luxury apartments look as though they have been through a war zone,

not to mention the devastation done to the vegetation and wild life, it really is absolutely horrendous.
Life in the slow lane is starting to catch up. Some cleaning up work has been done to the beach front and national park while a new owner now reigns over the resort; some of the back units have been repair to house a skeleton staff and the pool has been emptied of sand and filled with water just for the owner’s birthday party a week ago. Yes well...........!

Thursday: When we were to go ashore MrJ discovered that our outboard motor would not start and so begins the days of rowing to shore till we get to Cairns and get the motor seen to.


Other boats we know are here Cassini and Sophistocat; we invite Peter and Tania off Cassini for sundowner and they stay for dinner. It was great to catch up with Tania; we have not seen her since last year when Tania was crewing on Ginny’s boat Overproof.