Thursday 27th Sept – Low Isles
We left Yorkeys Knob in Cairn at 0730hs to motor sail, mostly motor to Low Isles, 30n/m up the coast, passing Double Island as we leave.
MrJ put the trolling line out while I start to get breakfast. Around 0750hs we hook a big fish that gets away just as MrJ has it to the bottom of the step. The fish was a real fighter and just shoot the lure out so hard that the lure ended up on top of the bimini.

Oh well! MrJ puts the line out again and we go back to the daily life of breakfast.
0915hs the trolling line is hit again and this time it does not get away. MrJ reels in a 60cm tuna mackerel, another good fish that we can get a few meals out of.
﻿
The seas are a bit lumpy with a small easterly swell and slight southerly winds. I can see ships passing on the horizon.

We arrive at Low Island at 1130hs and take up a public mooring.

After taking up a public mooring buoy and before getting a chance to settle in we were greeted by the resident Bat Fish and Black Tip Reef Shark. The Reef Shark had his mates tagging along - the Sucker Fish. I through a couple of small lumps of bread out to the bat fish and the sucker fish dart in to grab first while their ride, the shark, keeps circling. Reef sharks are harmless but I still don’t go in for a swim! 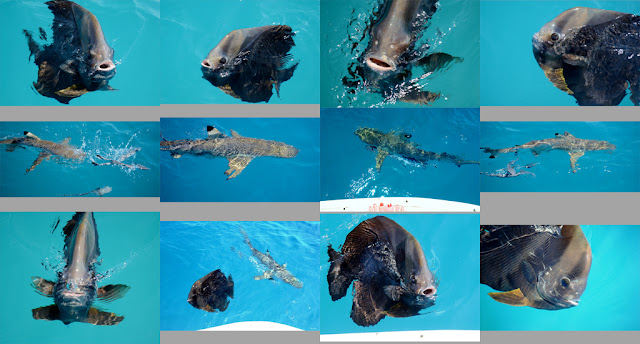 Low Isles - Low Isles is an inner patch reef, a large oval 200 hectare coral platform, 15 km north-east of Port Douglas. It is composed of a small coral cay (Low Island) and a larger mangrove island (Woody Island) Island is uninhabited except for a wealth of bird species - a vital habitat, all growing on top of senile coral reef. It has ecological importance due to the coexistence of a number of fully developed marine and terrestrial ecosystems. The combination of coral cay and mangrove island type is unique to the Great Barrier Reef. The hook like shape, which provides a sheltered lagoon, is also an excellent refuge and an ideal feeding ground for a large population of adolescent turtles. Living amongst the corals in the blue lagoon are a large variety of reef fish including angelfish, damselfish, anemones, giant trevally, sweetlip, fusilers and many green turtles.

Low Isles is an important indigenous cultural site for both the KuKu Yalanji and Yirraganydji aboriginal tribes. The sea country of both groups overlaps at Low Isles.

The English explorer, Captain James Cook, recorded the existence of these islands in 1770 during his voyage of discovery to Australia. He described Low Island as “a small low island”. It was officially named Low Isles in 1819.
A lighthouse was built on the coral cay in 1878. It was the tenth commissioned by the Queensland Government to help create the longest shipping lane in the world. There was a continuous presence of lighthouse keepers on Low isles up until 1993, when the lighthouse became automated. 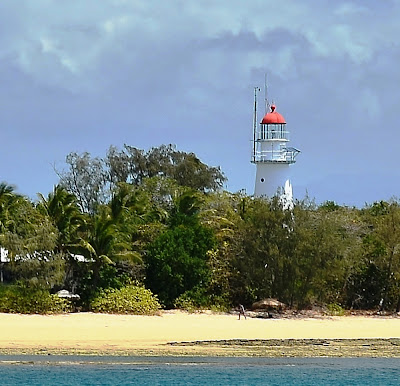 Weather data has been collected on Low Isles since 1887 and scientific associations date back to 1928 when it was the base for a yearlong scientific survey which studied the structure and ecology of the surrounding reef. This was the first detailed scientific study of a coral reef anywhere in the world.


MrJ and I leave Low Isles early the next morning to sail to Cooktown.