A Week in Mourilyan Harbour 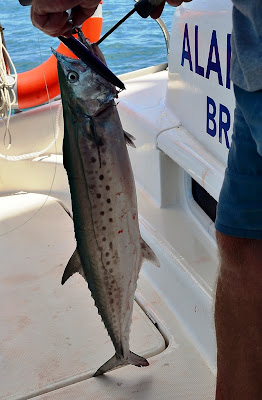 Friday 7th - MrJ and I leave Dunk Island mid morning to sail for Mourilyan Harbour, catching another Spotty, 75cm, on the way and just in time for lunch. No, I kept it for a BBQ dinner.
Then we hook something big, too big for MrJ to reel in; he struggles for ½ an hour getting the fish to nearly 15mts from the boat before the huge fish breaks the reel and snaps the line. Buggar...! I be thinkin’ that our tackle be too light...! 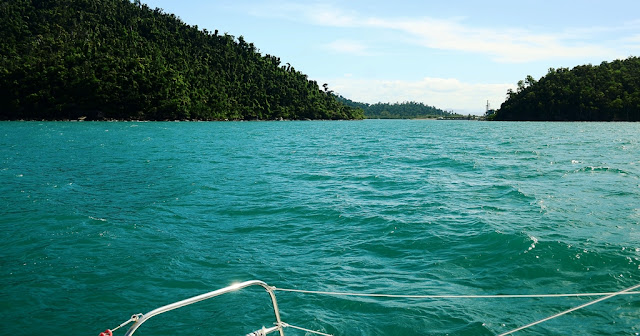 Just as we were approaching Mourilyan harbour entrance we heard a call on the VHF radio to VMR from a boat that was trying to enter with motor troubles. There was no response from the VMR; we think that they are only operational on weekends, so MrJ answered the boat’s call and this is how we came to meet Jonathan and Joey off Peggy Jane. Peggy Jane got in ok and so did we and it is raining again.

MrJ and I choose to anchor just behind the big yellow marker buoys for the shipping swing basin. The big tanker ships come in from time to time to load produce like sugar, molasses and livestock for overseas and it is not healthy to be caught inside the limits of the swing basin if you value your life or your boat.
Saturday through to Wednesday

MrJ spend most of our time on board doing our writings and photos. Not all time is spent on the computers but when the weather is foul there is not much else to do.  MrJ is also helping Jonathan to solve his motor problems as well as taking care of any maintenance or repairs on AR but still no luck in the out board department so we (MrJ) are  still rowing to shore. Jonathan also enlists the help of one of the trawler fellers and is given the use of a car to run into the small town of Mourilyan for supplies and parts. Jonathan and Joey bring me back a loaf of bread and a fresh paw-paw.
Saturday: During the afternoon we have Jonathan and Joey over for sundowners and dinner as a treat for all the mess that their boat is in through all the work that they are doing on their motor.
Sunday morning we have morning tea on Peggy Jane and have a lovely chit chat while the weather howls around outside. What a lovely old wooden boat Peggy Jane is.
Jonathan gives our dinghy a tow back to AR.
﻿
﻿ 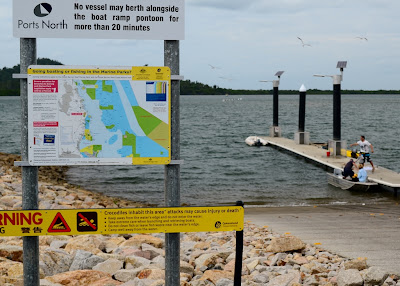 Monday: The weather clears long enough for MrJ and I to go ashore.
The new double boat ramp that was started last year has been finished and was in good use. Several small boat were tied up to one side, fishing boat were constantly using the other side and people were on the central pontoon fishing. 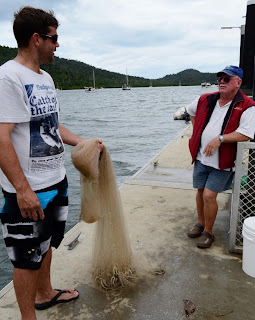 MrJ and I chatted with one of the fishermen, while watching him sort his net catching of no-keeper undersized barracuda which were being thrown back but the sea bird were snavelling the fish up as soon or even before they hit the water.

Ashore, the local VMR building and facilities were still there. Next to the VMR is a new large car park for boats and trailers and behind this car park is a very large yard full of stacked timber that had been recovered from last year’s cyclone clean up.

The stock pile of logs went for a least a kilometre long and I could not see how deep the yard was. To the other side of the VMR and further around the harbour is the main shipping wharf which we were unable to get to unless we were to walk around the timber yard and MrJ did not want to do this, leaving the boat for too long in case the weather turned again.

Back near the boat ramp, on shore a large catamaran, Rainbows End, had been hauled out of the water and was sitting high and dry with massive damage to the outside of one hull. 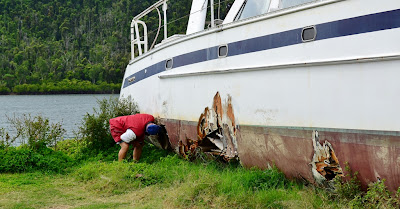 According to the fisherman, this boat has broken its mooring during a storm and had been blown up against the rock wall of the harbour. By the time the owner could do anything it was too late and there was no one to assist. The local VMR were not around, they are active only sometimes and only on weekends, and other ships in the harbour were unable to help for whatever reasons. Now the boat sits on dry land wasting away.
MrJ and I head back to AR, MrJ rowing, but do not get very far when Jonathan comes over to give us another tow. What a nice fellow this Jonathan is!
﻿ 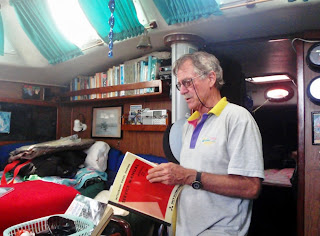 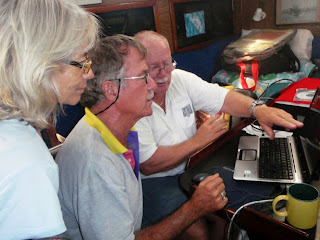 Tuesday: It rained for most of the day, not good for going anywhere so I was content to laze around all morning editing some more of George and Maree’s wedding photos. After lunch we rowed over to Peggy Jane again for a chit-chat as well as MrJ helping Jonathan with some computer charts.

During this rainy weather a couple of more prawn trawler came into the harbour, by late in the afternoon the trawlers had moved anchorage. They knew that a ship was due in the next day and had to get out of the swing basin. AR was safely on the outside of the swing basin. 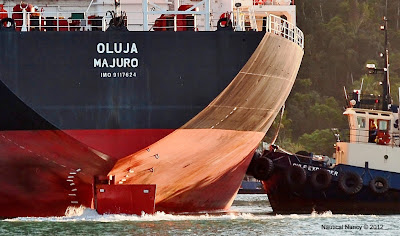 Wednesday: Excitement before dawn, well at least for me as there was boat movement in the harbour. There were now two large tugs in the harbour, one must have come in through the night and now both had motors fired up and revving to go. The small pilot boat was edging its way out of the harbour and there was a squawk of conversation on the VHR radio. The ship was waiting just outside, just out of my view.

Just before sun up the big tanker ship creeps bow first into the harbour and with the help of the two tugs was spun around and parked at the wharf with its bow now facing the harbour entrance. The tugs are dwarfed by the huge ship.
It was raining again, I went back to my photo editing and MrJ began his chart work prepation for our passage from North Queensland to the Gulf.
Thursday: MrJ and I were up early, before daylight to leave Mourilyan Harbour. 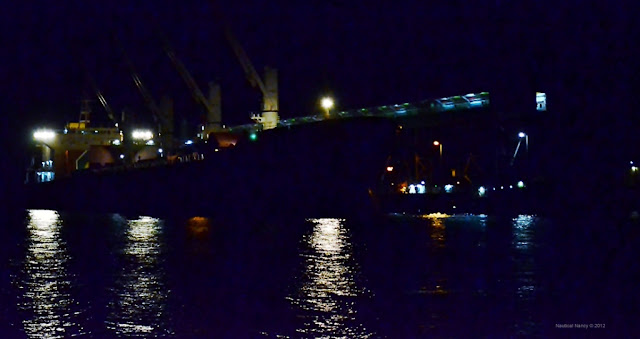