Sailing Through the Night to Sth Golburn Island 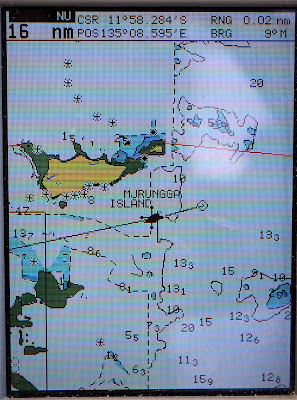 MrJ and I sailed out of the seclude anchorage at Elcho Island through the shallow waters that weaved its way through the massive sand shoals between the Crocodile Islands on our way to Boucaut Bay the other side of Cape Stewart. The colour of the water rolled through turquoise, aqua and jade as the glaring white clouds tumbled across the sky, throwing racing shadows on the sea. The shallow channel was not marked; MrJ had to keep a watchful eye on the depth sounder and the surrounding sea as well as run both chart plotters. A couple of times AR nearly ran out of water and MrJ had to slow to a crawl to negotiate the weaving channel.
Our intended anchorage in eastern side of Boucaut Bay proves not to be, as the chart plotter comes up with a plain white area which means that this is Aboriginal waters, a scared place of the saltwater peoples. Boucaut Bay is probably a sea grass bay with turtles and dugong living and feeding in there. Cape Stewart anchorage would have us exposed to the northerly winds and rolly swell; we had the option of going further into the bay to anchor in the Blyth River or to keep going. MrJ and I weighed up our two options. To get into the Blyth River you need the top half of a rising tide to get in and good light as the river entrance has sand bars and is not marked. The river was some 16n/m away, a long haul down to the bottom of Boucaut Bay which would take us off what little wind we did have and the better of three hours to get there. It was now 1540 and the tide would be high at 1600hs; we would not make it before the high water or in good light. The choice was easy; the only option was to keep going, to keep sailing through the night and gave us a better angle to sail with. 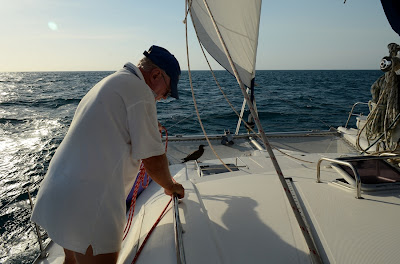 The tropical hot sun was losing some of its heat as it sunk lower toward the horizon. It was about this time when MrJ and I decided to put our safety harness line around the cockpit and out to the masthead. This is for safety when night sailing or in bad seas or foul weather condition, especially if there is only one of us up and about. 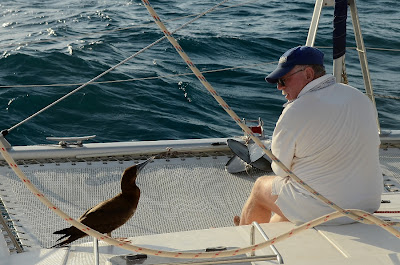 As MrJ was running the line down the port side he notices a large brown bird that had made its self at home on the foredeck. The bird was a juvenile Brown Booby bird that had come in for a little rest and had decided that AR would be its roosting place for the night.
MrJ gingerly made his way out onto the tramps, not because on bad sea condition but because he was afraid of frightening the Booby bird. The Booby just stood there watching the late afternoon work flow not flinching a feather. MrJ sat close by and even had a one way conversation with the Booby and funny enough the Booby looked like it was listening too. 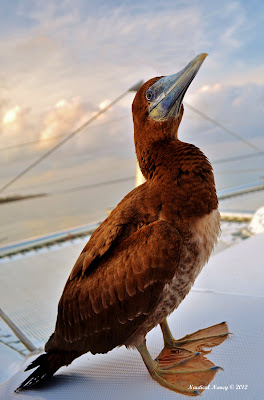 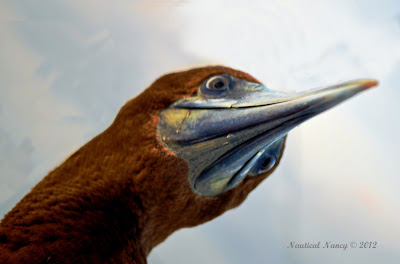 It winters at sea over a wider area. Brown Booby pairs may remain together over several seasons. They perform elaborate greeting rituals. Brown Boobies are spectacular divers, plunging into the ocean at high speed. They mainly eat small fish or squid which gather in groups near the surface and may catch leaping fish while skimming the surface. Although they are powerful and agile fliers, they are particularly clumsy in takeoffs and landings; they use strong winds and high perches to assist their takeoffs.
The Brown Booby bird stayed on the foredeck all night with its head tucked under its wing night sleeping peacefully through the rough ride. The Booby was the only one on board who got a good night’s sleep.
MrJ and I dropped the anchored in the early morning light in South West Bay at South Goulburn Bay.