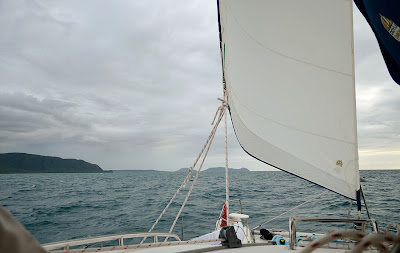 Leaving Cooktown at daylight MrJ and I put the sails up once we get AR out of the harbour. MrJ puts a reef in the main as we are not too sure how strong the winds will be until we get away from the landform. We are once again followed out by another sailing boat, Mist n’ Jibe a 49’ Jeanneau and we kept ahead of him all the way even with all out fishing encounters.

0930 MrJ had put the trolling line out. AR had not long passed Cape Bedford when we had hooked a small long tail tuna; not big enough so we gave it back to the sea. An hour later with the trolling line out again and AR was approaching the narrow shipping channel between the islands south of Cape Flattery, Conical Rock, Three Isles and Low Wooded Isles we hook another fish. MrJ has to earn his keep to land the 85cm long tail tuna. Enough fish for a week! 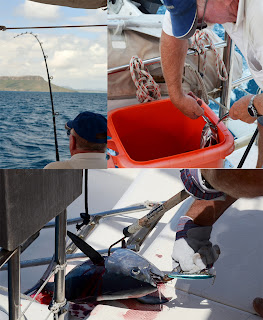 Many people do not like the taste and flesh of the tuna fish but if you cut the large fillets off, cut out the darker flesh it is good fish. The lighter flesh can be cook straight on the BBQ or can be marinated in lemon and/or lime juice or like squid, in milk, peanut butter and sweet chilli sauce before barbequing or made into a marinara, a mornay or a Laska type dish. 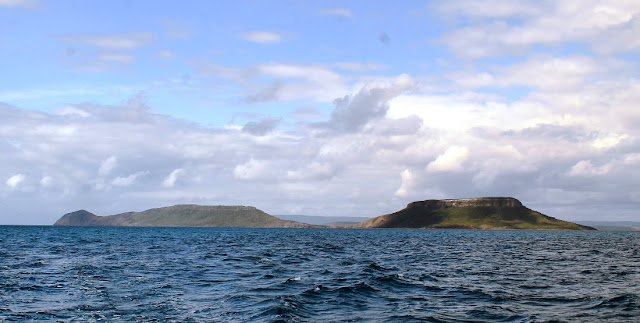 As Murphy’s Law would have it, just as MrJ is close to landing the big fish we are on course to collide with Low Wooded Isles; I change course to port and to lessen the wind in the sails which slows us down further giving MrJ enough time to land the tuna. And if that is not enough excitement for one morning, there are two ships in the channel, one to the south and the other to the north, fast approaching AR. With fish on board, in the orange wheelie bin, makes a great fish in, MrJ dodges both ship with an old sailor’s expertise…………! 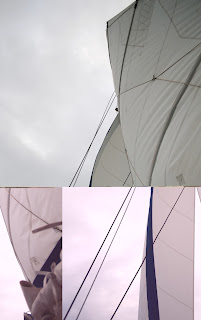 We followed the outside of the shipping channel for a couple of more hours, with full sails flying, cutting through the beautiful turquoise sea at 7 – 8kts. 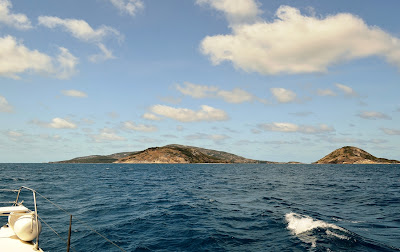 Approaching Lizard Island from the south, we round the smaller islands of South and Palfrey Islands to pull the sails in, motor into Watson’s Bay on the NNE side of Lizard Island and drop the anchor at 1440hs with the wind still blowing a treat. Welcome to “Blizzard Island”.