Smokey, dusty and smelly is what I have experienced so far. No, I am being a bit unfair; I forgot to add pushy and rude. But then again I have also experienced friendliness, helpfulness and a lot of beauty.

MrJ and I dropped anchor in Inverell Bay Gove Harbour late Friday afternoon with enough time to spare to get ashore for a beer and dinner at the local Gove Boat Club.
Gove Harbour is not that tricky to get into as long as you keep to the middle to avoid the rocky outcrops form the headlands, manly Rocky Point and De Belle Point which are the north and south headlands for Inverell Bay. A worse hazard is the rocky reef that lies well out from the NE corner of the bay and has claimed many a victim in the past. This reef is located a little north off the Boat Club but is clearly marked.
﻿ We come across a sunken wreck in the middle of the moored boats as we make our way to shore, this wreck has also been marked. It is a low, low tide and we drag our dinghy as far as we can through the sandy mud, dropping the anchor before sloshing the rest of the way to the beach. You can was your feet at a fresh water tap at the entrance to the pathway to the Boat Club. This pathway takes you through to the front of the club and then you can enter the building front there. Otherwise you walk along the beach past the front fenced grounds of the club to the boat ramp, follow the fence up the side to an entrance there. 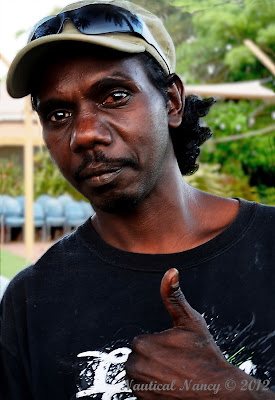 The Gove Boat Club is where we met a local aboriginal lad Gavin who befriended us, told us stories and let me take his photo. At a price though – for the price of a can of beer! There are quite a few local aboriginal people in the club grounds, which are fenced in, so the people must be members of the club or that they are allowed to come and go as they please. I really do not know what the ruling is especially concerning Aboriginal Territory. Do I sound racist? I don’t mean to be; I feel for the Aboriginal people and don’t like to anybody stoned out of their minds or rolling drunk hustling. But then again it does happen all over the world. I know that there is a general Law against consuming of alcohol in public places except in the designated areas. The Gove Peninsula and the East Arnhem region is are ‘dry area’, including the town of Nhulunbuy and the surrounding communities of Gunyangara (Ski Beach) and Yirrkala. Drinking by anyone, in public places is prohibited, with the exception of some popular recreational areas that are sign posted. The region has a liquor permit system. You can drink in a licensed premise, for example a hotel, club or restaurant, but you need to obtain a liquor permit to buy takeaway alcohol and drink in a private home. 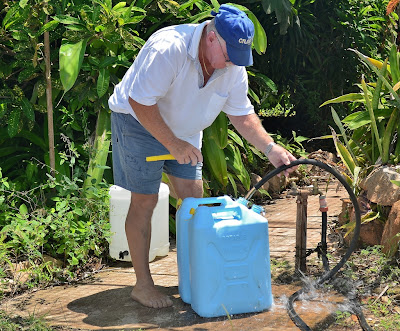 Saturday at high tide, round elevenish, we dinghy with our jerry cans into the club’s tap for water. This is getting close to being the hottest part of the day. Two trips we had to make to get the tanks full again, will leave a third trip till another day. MrJ had to lift the full jerries from the dinghy onto the side deck of AR, a very physical task for someone half his age.
So MrJ and I have introduced ourselves to the boat next door, Pacific Xpress and the mangers of the club who live on a large catamaran in the harbour. I think his name is Roy (???) but cannot remember his partner’s name. Isn’t it so terrible! Roy and his partner sailed up from Mooloolaba two years ago, sailing around the Torres Strait Islands then getting some work on TI (Thursday Island) before taking the manager’s job here at the Gove Boat Club, will have been here 12months come this December and loving it. We had a nice chat with a couple of young ladies who work in town; one is a part time teacher and has a couple of kids. Their hubbies work in the mines.
Must not forget to mention old Norman who came to the club each afternoon to sit and read his book while having a couple of drinks. It was Norman who gave me the heads up about my mate Gavin. Gavin came pestering around the drinkers once again and eventually got around to our table. He was as high as a kite, I don’t think it was the grog, and did not remember me at first. Gavin was hustling again this time trying to sell a painting on a piece of canvas. The price – you guessed it – for the price of a beer. I was not having a bar of it this time and told him so. Later when I was chatting with Norman, Norman tells me that Gavin would have most probably stole the painting from his mother. I am so glad I didn’t buy the thing.
MrJ and I did get to chat with a couple of other boaties; most are waiting to head across the Gulf but one boat, a large black ketch, is heading for Darwin. Father and son crewing with the son’s young kids – mum is working back in Darwin. The son bought the 73’ ketch in Airlie Beach for $40,000 and has been lucky to get it this far. I wish them well!
We have also Greg and Clem a couple of real true blue characters. Clem has a boat in the harbour and a on the point which he is selling. Clem has been getting his boat ready to sail south and Greg is up here to help him and sail back with Clem. Greg is the hubby of Jan one of my FB friends who is away visiting grandkids. Both fellas have been very helpful with information and stories from across the Top End. Greg with Jan and Clem have sailed the Top End extensively of many years and across the top into the Kimberley’s. Thanks for the information fellas and thanks for your friendship.
Sunday MrJ and I pulled the genoa down before the wind kicked in. Later that day after our second visit from Greg and Clem, we dragged the Sailrite machine up on deck and did a few repairs to the UV strip on the sail. MrJ bumped his head and bleed all over the place and is now sporting an ugly gash on his scone. He is okay now as we kept pressure on the cut and then washed it in Detol. He bleed easily due to the aspirin, blood thinner, that he has on since his artery Stent op some years ago.

Monday we have hired a car to go to town.
Posted by Nautical Nancy at 22:40