Nhulunbuy on the East Arnhem Region 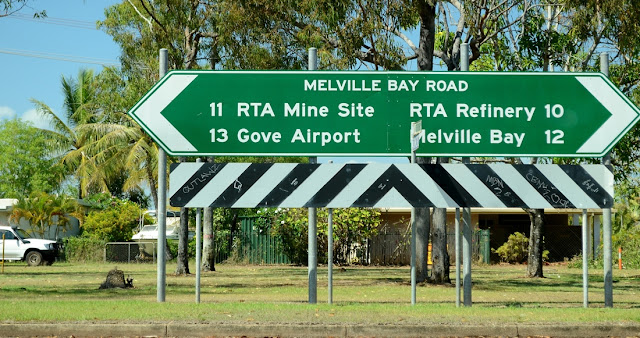 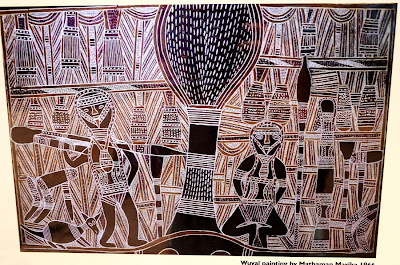 Nhulunbuy is the name of the township created on the Gove Peninsula in the Northern Territory of Australia when a bauxite mine and deep water port were established nearby in the late 1960s. It is still the working town supporting the Rio Tinto Alcan Gove Alumina Refinery and mining operation.
The Gove Peninsula is home to the Yolngu people, who celebrate and share their cultural inheritance annually with the Garma Festival, which is supported by the Yothu Yindi Foundation. The world renowned rock band Yothu Yindi also calls the area home.


MrJ had rung a fella in town to hire his 4X4 twin cab ute to take us into the town of Nhulunbuy on the Gove Peninsula in East Arnhem Land. A real local was this fella, had been in the town since the late 60’s, spoke with that out back dry sense of humour, dressed in the bushies dress, rough looking and hard wearing khaki shirt and shorts. This fella was as friendly as a bush fly on a hot day; giving us the heads up on all the local stuff and when to find the best things. The twin cab ute reflected the same manner as its owner.
Once in town the first thing MrJ and I needed to do was get ourselves a Permit to be on Aboriginal land and a Permit to by alcohol; I did explain this in my last posting. We drove around with our bright yellow empty jerry can in the back until we found the Dhimurru Office (near the IGA Shopping Centre and Mitre 10) where they issue local permits for areas surrounding the town. The officer in this place told us as long as we don’t go off the main road or outside the town limits except to travel by road back to the Boat Club than we would not need to pay the $20 for the local permit. I asked about the lookout at Mt Saunders and we were told that it would be okay. Good enough for me! But you know my land navigation skills are just not that good and we did end up past the lookout, at the end of a dirt road where the communication towers where, on sacred land, and MrJ had to do a 10 point turn to get us out of there. We dare not stop or get out of the ute for fear of getting caught. The lookout was about half a mile back where we parked the ute and climbed the metal structure that our mates Clem and Greg had a hand in help building a couple of years ago. As we came down the lookout road we were passed by an official looking vehicle on its way up. We were so lucky!
The next place to look for was the Northern Lands Council Office; we were told that it was next to LG Hooker near the Endeavour Shopping Centre. Not hard to find as there are only two shopping centres in the small town. When I say shopping centres I mean more like a small group of shops in the one location. It didn’t take much to find this office either; though very slow to come to the counter (island time) the young lady was very helpful. I showed her my list of places that we would most likely being anchoring in each night of our passage across the Top End and into Darwin stating that the only island that we would be interested in going ashore was Elcho Island where there is a community. The young lady tells me that this one is okay and that we don’t need a permit for the community of Elcho but was not forthcoming with permits for anywhere. She was a bit evasive with the whole thing and just kept saying that we are not allowed there. Maybe it is in the “too hard basket” for her or she just did not want to do it. (???) 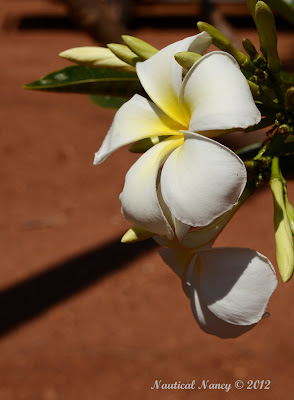 I know that the Northern Lands Council Office needs to get permission from each traditional area’s tribe before a permit can be issued which in these modern times came be communicating by phone or email as I do know that all communities have their own communications tower or satellite dish, I have seen them and if you look up the Telstra web site you can find where you can get service. Anyway, this young lady can only deal with Eastern Arnhem Land and will email our request with the list of Western Arnhem Land place to their office in Darwin and they will get back to us via email. Wait a minute, this sounds all too familiar; was it not the Darwin Northern Lands Council Office that I had originally sent all that information off to via an email way back in July of this year and never got a reply, not even a “thank you, we have received your email". (????) Where as the Aboriginal Council in Western Australia sent our permits for the Kimberley’s in August this year. (I’ve had my bitch for today, now I will be fine) One thing the young lady in the Nhulunbuy office did say “you can anchor in most places as long as you don’t not go above the high tide water line you would be fine”. That’s good enough for me, I say thank you very much, have a nice day then smile and turn on weary heals and walk out!
﻿
In the same shopping centre is a good stocked Woolworth, where we bought our supplies and alcohol, a Chemist, two cafes, a Westpac Bank, a fishing tackle shop and a couple of other shops and that’s about it! We also found the Dept. of Justice in the Endeavour Shopping Centre. Dept. of Justice is where you apply for your liquor licences. The young lady at the counter was not surly like we were led to believe but neither was she very warming towards us (officious is the word MrJ used). I suppose working in the place that she does in an outback community does something to your character. MrJ and I did go into the chemist, enquiring about something for his sore head. The young lady behind the counter was another boatie Yasmine who with hubby Marcus had been up here working for some time. They also knew other friends of ours from Airlie Beach. This boating fraternity is a small world!
MrJ and I had a salad roll and drink from one of the cafes to time our grocery shopping to be finished just before the liquor shop opened at 1400hs (that’s part of the rules up here and throughout most of the Territory). We bought our beer and wine, filled our fuel jerries and high tailed it out of town.
Don’t get me wrong with my ranting about things; I did like the look and feel of the township and the people I suppose it was all happening in one day and we could not afford to be on “island time” that day.
Heading out of town on the Melville Road the roadside scenery is typical Territory with low bush and red dirt with dotted traditional communities along the way. The biggest and most noticeable thing/object that stretched across our view was the very long overpass of the conveyor belt that runs from the mines to the port. The main vein of the Gove Peninsular! 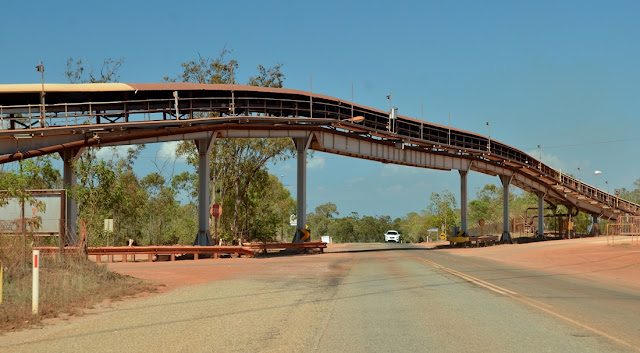 MrJ and I had made two trips to town the first was for a fuel run the second for the supplies and some more fuel. The first load of fuel MrJ took out to AR in the dinghy and put the fuel in her tanks then returning with the same jerries for our second trip into town while I waited on shore in the shade of the club’s car park trees. 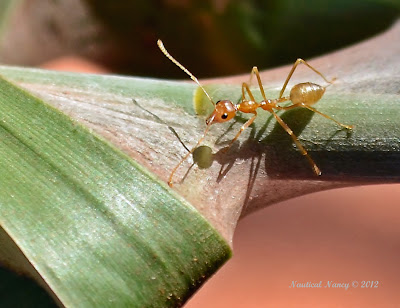 I didn’t last in the shade for very long as there were things to be discovered; things like a very tiny abandoned red dirt spider’s web, some pretty frangipani flowers and a green ant’s nest as well as striking up a conversation with some other boaties at the boat ramp. I just can’t stay put! 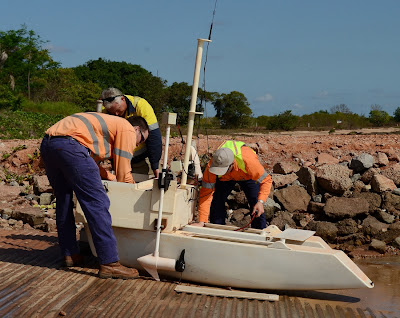 At the end of our last trip there were a couple of fellas in orange and yellow shirts, which is pretty much the standard dress in any mining area, about to launch a strange looking craft. I got talking to these fellas too. The craft was a homemade remote controlled power catamaran which they were test for work. The craft was meant to use as a survey vessel across the sediment ponds at the mining plant.


Ponds and Sediment Basins are used to retain course sediments from runoff and are typically the start of a ‘treatment train’. They stop downstream environments from becoming smothered in sediment, by reducing flow velocity and encouraging sediments to settle out of the water column. They can be designed as permanent or ephemeral pools. For more information on how things work: http://technology.infomine.com/sedimentponds/

Tomorrow we sail for the Wessel Islands.