Tis the Season in Tasmania

Tis the Season in Tasmania - December 2013

The life is slow and the days are cold in my new home at the Tamar Marina at Beauty Point.


Beauty Point is a small town on the Tamar River that is the home to the Tamar Yacht Club Marina, a major yachting hub, and two major tourist attractions, Sea Horse World and Platypus House. As much as I would love to see these wonderful creatures in the wild, I don’t think I will. To visit Sea Horse World and Platypus House gave me a unique chance to see these creatures in the flesh.

Beaconsfield is my nearest town for supplies and fuel.
The Beaconsfield area was first settled in 1804. By the 1870s the town was a major producer of gold, the old Grubb Mine. The active mine finally closed its door in early 2012.
I visited the Beaconsfield Mine Museum. This was well worth the visit, lots of great information on mining and great interactive displays. Also there were some wonderful exhibits on early Australiana.
In April 2006 at Beaconsfield, Tasmania, a mine accident killed one man and trapped two more underground for days.  Five days later their colleagues found a way to get the two miners out safely. The miners were trapped over half a mile, almost a kilometre underground (925 metres). It was two weeks (or 321 hours) after the mine collapse that the two miners walked free and put their name tags onto “safe”. The mine disaster is handled with great sensitivity and this gives a good idea of this little town and the banding together of the community around this event. The day the two miners were rescued was the funeral of their colleague who had not survived the initial rock fall.
Later in the year, a ‘close-knit community knitting’ project began to knit a scarf 925m long. People were invited to contribute small sections to the huge scarf. All the pieces were joined together to make this scarf which would symbolise the careful work of the many people involved in the rescue. There were knitting days in the local town of Beaconsfield and contributions from farther afield (Tasmania, other Australian states, overseas). On the first anniversary of the accident, the “Close-Knit Community Scarf” was unveiled by local schoolchildren as part of the ceremony.
It is astonishing how many ways the work of our hands can serve to unite, to remember, to draw us together as human beings and people and communities. This is just one. The many AIDS quilt projects around the world are another.  The list of the various possible activities is long and wonderful and humbling and grand, often beginning as the “what-if?” thought of one or a few people. The value and rewards can be as much if not more in the doing, the process as in the finished product. It is all about patience and commitment, not just skill.
In the main street you can still see a few of the old buildings.
In 1884 the Beaconsfield Bank robbery took place. The bank manager was waylaid and robbed of the keys to the safe. After robbing the bank, the robber re-locked the safe and threw away the keys. Francis Jackson, a locksmith from Launceston went to Beaconsfield to open the safe. The staff at the bank told him that it was no use trying to open it as the lock was un-pickable. Francis Jackson inspected the safe and requested staff to retire for a few minutes. Shortly afterwards he called them back and swung open the safe door, proving that he had picked the "un-pickable" lock.
MrJ and I made many trips into Launceston; on one of our trips we stopped in at the Cataract Gorge, which is on the NW edge of Launceston City at the beginning of the West Tamar Road and is a highlight of the City. The gorge begins at King's Bridge and continues for many kilometres to Trevallyn Dam. Most people do the short walk from King's Bridge to First Basin, where there is a lovely old kiosk and restaurant. MrJ and I drove into the car park at the top and walked down. A chair lift can take you across First Basin; I preferred the walk across the swing bridge. 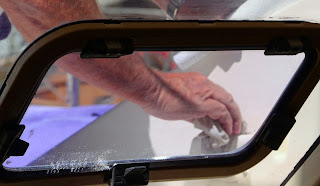