Leaving the Tamar
Friday 24th Jan 2014; Alana Rose is sitting alongside the wall in the Stanley Boat Harbour. We broke away from the marina’s hold three days ago and are now on the run once more.

Tuesday 21st Jan 2014; MrJ and I had chosen to take a run up the river, the Tamar River, before heading out to sea. The currents in the river are very strong and will take you away when trying to go against then.
We anchored in what is called Devil’s Elbow a side gullet up near the Batman Bridge. This section of the river is narrow, deep and features very strong currents and tidal flow which we did not want to be caught in. As it was, in Devil’s Elbow there were many moored boats that had taken the best spot and we found ourselves somewhat in the middle of the gullet and in direct line for the wind to bullet through a saddle in the hills. The wind backed off after nightfall leaving MrJ and I to get a good night’s sleep, well sort of; in between anchor checks.

Batman Bridge Connects the West Tamar Highway to the East Tamar Highway over the Tamar River. It was built from 1966 to 1968. It was the first Cable-stayed bridge in Australia. The main span is 206 metres (675.8 ft) long, suspended from a 91 metre (298.5 ft) high sloped A-frame tower. The deck is 10.3 metres (33.8 ft) wide. Many protesters have climbed this bridge for different reasons over the years the last being in 2007 for “We don’t want the proposed pulp mill that is headed this way further down the river causing who knows what to our wonderful clean green environment”. While in 2011, over 1500 people filed across the Batman Bridge in yet another protest. The Pulp Mill is an ongoing controversy even today.  http://au.news.yahoo.com/a/20911460/pulp-mill-bill-extends-time-for-potential-buyers-to-build-tamar-valley-project/ 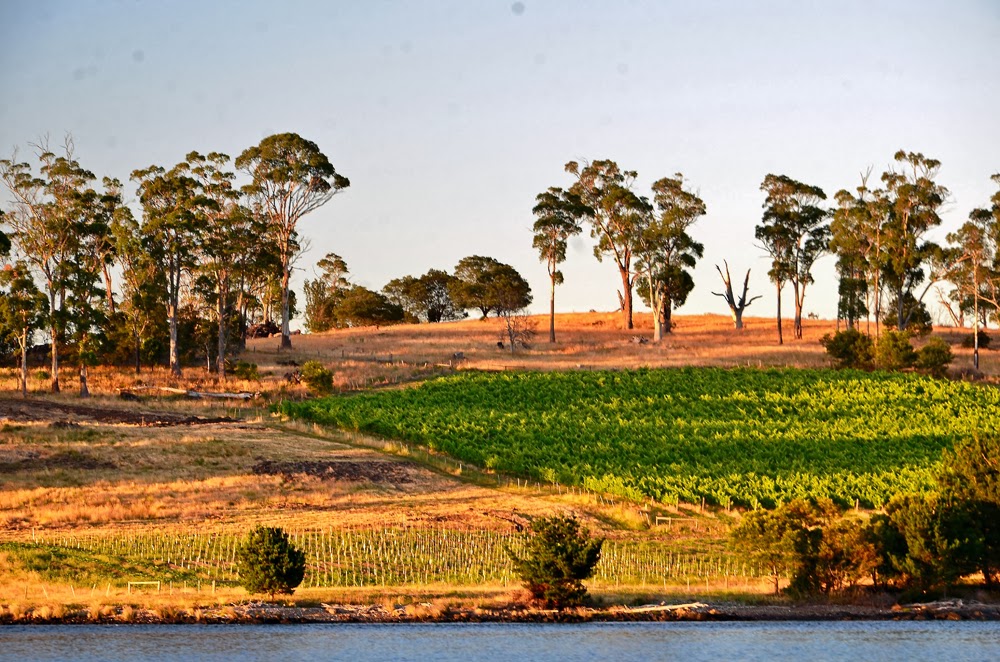 Wednesday 22nd Jan 2014 at 6000hs we pulled up the anchor form the wonderful mud bottom and headed out of the river. We pass the beautiful rolling hills with rural setting, the small hamlets along the shore and the last of the pulp milling on the eastern shore. 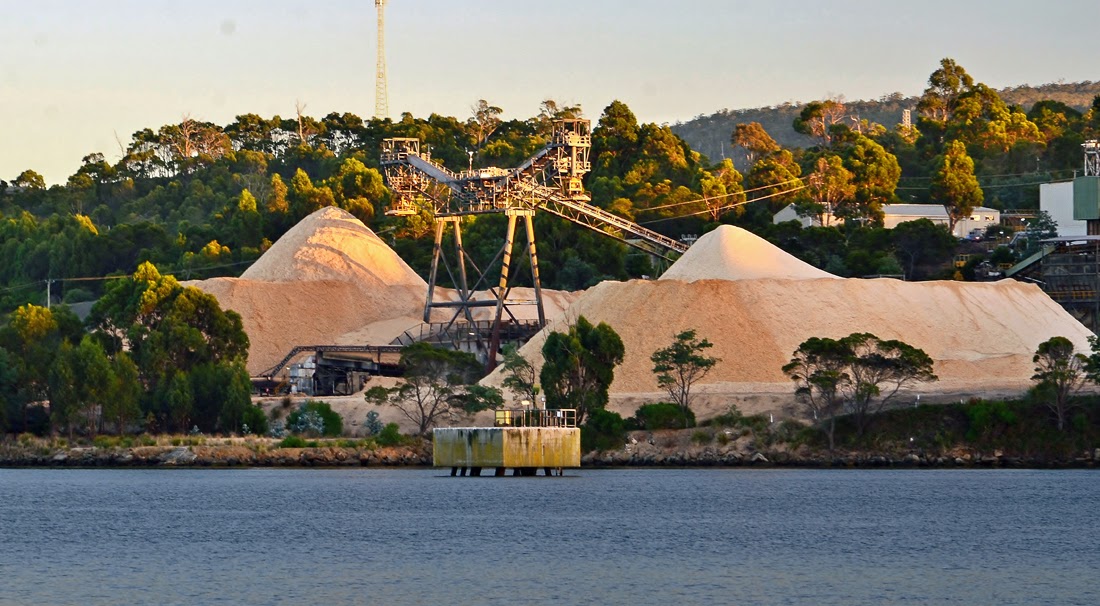 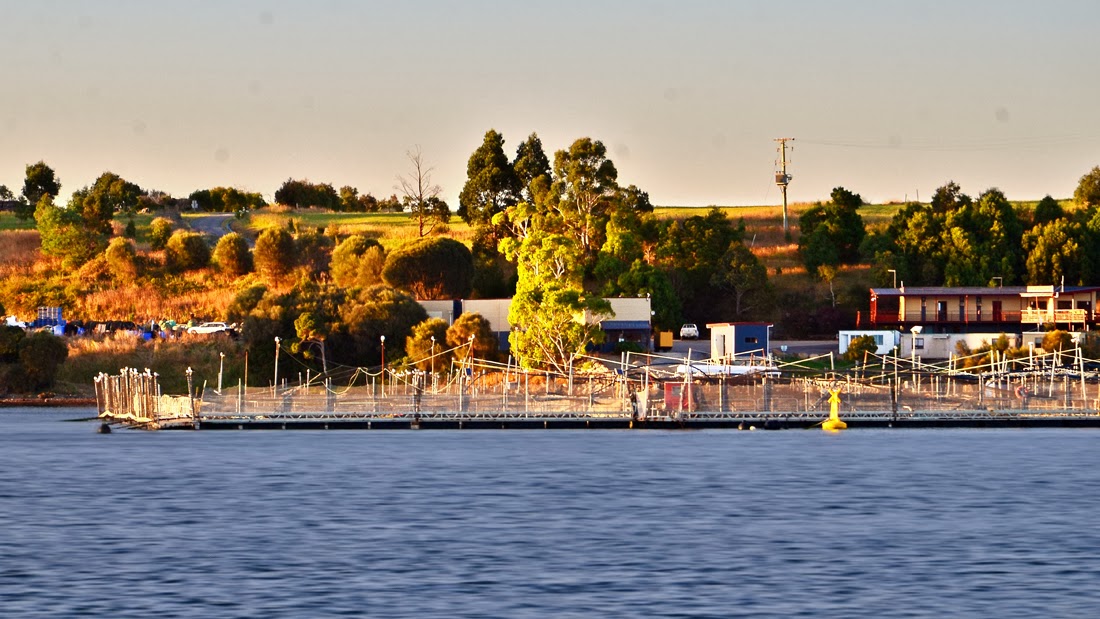 We also pass a salmon farm.
Tasmania's northern most salmon farm, Van Diemen Aquaculture is situated at Rowella on the Tamar River. It is the only Tasmanian salmon farm utilising Norwegian styled system farm technology. Van Diemen Aquaculture produces over 2000 tonnes of quality Atlantic salmon each year in a lease area just over 6 hectares. Van Diemen Aquaculture use state of art automated feeding systems and internationally recognised humane harvesting systems. The fast flowing waters of the Tamar produce firm, toned fish ideal for sashimi but also perfect as fillets on the barbecue or whole salmon seasoned and in the oven. The fish farm claims to be one of the only farms in the world to be antibiotic and anti-foulant free and the only company in the world that use 100 per cent brass nets.

As we move down towards the heads, the river opens up and has some shallower sand flats which we have to navigate. The tide was going out making our passage quite good.  As we pass by the lighthouse at Low Head the outgoing tide hits the incoming swell from the sea causing a great turbulence in the water.

This was short lived and we were soon on our way west along the coast to do the next 20n/m into Devonport. The shoreline was once more spread with a rural outlook; of what looked like manicured paddocks with dots of white building in between.

MrJ and I had put both sail up for most of the way; we than furled the genoa about two thirds of the way due to the shift and drop in wind. The main was pulled in at the mouth of the Mersey River just before entering. As we came closer to the entrance to Devonport and the Mersey River I could see the town building along the shore with the rolling hills behind and the mountains in the background. What a beautiful sight to see from the sea!

AR motored up the Mersey River. I could see the Spirit of Tasmania ferry at the wharf along with two other commercial ships that were docked. The ferries have been used for regular transport across Bass Strait between Tasmania and Victoria. The shipping company’s twin ships depart from both ports at 7.30pm and arrive the following morning at 6.00am. During peak season (around Jan, Fed & March), they also operate day sailings departing from each port at 9.00am and arriving the same day at 6.00pm. 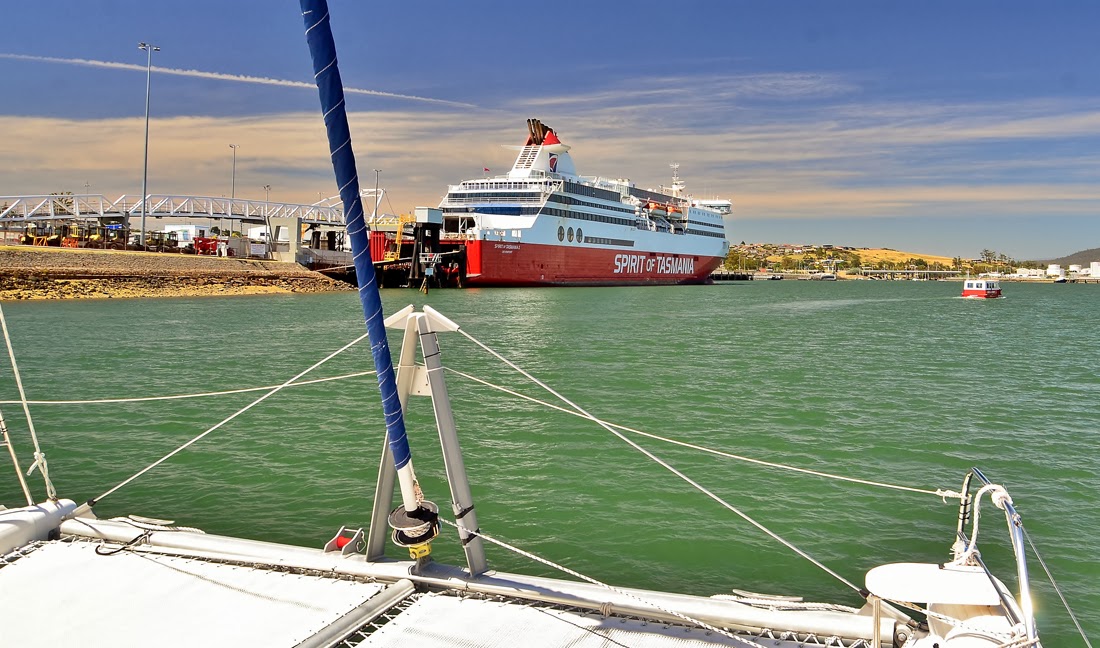 Our destination was the Mersey River Yacht Club; we had lined it up with the Commodore, to be able to tie up on their jetty for the night and as Murphy’s Law will always have it, there was another boat on the jetty. MrJ brought AR alongside the pontoon on the end of the boat ramp jetty till we could sus the situation out. At the very same time our friends from Devonport, Cabba and Anne had arrive to greet us in. With the help of Steve off Rhapsody (the boat on the jetty) MrJ managed to backed AR onto the YC and then we were able to greet our old fried while making new friend on Rhapsody (Steve and Karen).
Mersey River Yacht Club - Investigations revealed that the first regatta held at Sayer's Point, where the original Club House stood was in 1877. It was not certain whether a club-house was actually built at that time, but it is certain regattas and other yachting events were held then. A Yacht or Aquatic Club was inaugurated in September, 1893. The inaugural meeting of the Mersey Yacht Club, as we know it today, was held at Curwen's Salon in Rooke Street, Devonport on 12th November 1923 and the first open day was held that December. Our mate Nigel, crew on Banyandah, the boat that we had sailed part of the west coast of OZ with and cut across Bass Strait with; his dad, Morrie Cropp was the Commodore of the Mersey River YC in 1972.
That afternoon we were whipped away by Cabba and Anne to spend a lovely time on their back veranda after the pleasure of a hot shower and I was able to do some washing. Good to have great friends!
That evening it was to be with more friends (the Banyandah mob – Glen, Anne and Nigel) again; dinning at the nearby Argosy Motor Inn Bistro (nice meals and friendly service). The friendship that sprouted on the faraway wild western coast had grown and ripened into a closeness that felt like family. I hope this will not be the last that we will see of the Banyandah mob.
Posted by Nautical Nancy at 15:39