MrJ and I decided to go further up the Prince Regent River and the sky was still sending down light showers. We left Purulba Creek at 0645 going against the flooding tide till AR cleared the creek and was out in the main stream of the river and then the tide was going with us.
Once again the anchor winch would not work but after a lot of fiddling around MrJ and I managed to get the anchor up. My small gas stove has been going on strike as well but I know which one will get fixed and/or replace.
As we leave the anchorage MrJ see a croc swimming near the SE bank. Going further up the river we have to negotiate more sandbars rocks and small mangrove islands. With the anchor winch not behaving we decide to not to explore any further upstream than Camp Creek. I didn't want to be stuck many n/miles away on a falling tide with the tidal range that these parts of the Kimberly’s get and MrJ was not comfortable with it either. The 4n/m ride up the river was very scenic but not as spectacular as the Berkeley or King George Rivers and maybe it gets better the further you go up but we did not find out. MrJ and I anchored AR just before the mouth of Camp Creek in a small bay on the northern shore of the Prince Regent River (15'32.340S - 125'12.113E) with me grumbling and cursing at the broken anchor winch trying to anchor in deep water with a good wind blowing which was blowing against the tide; wind against tide. I had to get MrJ to come and relieve my anchor duties while I took the helm. I needed a coffee, I needed some medication, I needed something as my tummy was in knots and I felt like I was going through PMT again. Buggar!!!!!!!!


And then the skies opened and poured down rain! I think that the water spirit Kaiara on Bigge Island was looking over us!

A little wet weather was not going to stop our exploration into Camp Creek, up to where the fresh water flows over the rocks. We took some water jerries with us and off we went. From the anchorage near the mouth of Camp Creek it is a pleasant dinghy trip to the head of the creek about 2-3n/m upstream. The trip up the creek was very pretty with mangroves, bushland, rocky outcrops and small rocky hills with the higher hills in the background. I saw a couple of croc making a dash for the cover of the mangroves. Many birds were in the sky and their sounds could be heard through the air. 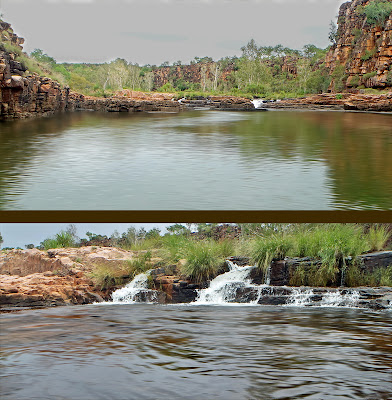 We travelled over numerous submerged sand ridges up the creek to the first set of freshwater rapids at the rock bar. It was just on the turn of the tide when MrJ and I climbed out of the tinnie onto the rock ledge by the fast flowing rapids. At the rock platforms and ledges of the rapid, while keeping a wary eye out for friendly lizards, MrJ and I soon filled out water containers.

Before leaving we climbed a little way further across the water sodden rocks in the creek bed at the top of the rapids to discover several large and small rock pools amid lush vegetation; grasses, bushes and small trees. Very beautiful but very dangerous, croc country!
We did not take the walk or climb further upstream to where there was supposed to be a 40mt waterfall and higher water holes that were supposed to be safe to swim in; we were keeping in mind the time and the tide. We had to be out of this beautiful place before the tide fell too far for us to get out.

With the tidal change was also an increase in the wind which was now pushing AR towards the rocks on the river bank. Back on board with our water supply and the tinny hauled MrJ and I hauled the anchor to motor back to the Purulba Creek where MrJ had to put the anchor down but manually using the clutch. (I’m not taking about this anymore!!!!!!!) At least I felt more comfortable here.
After lunch MrJ and I tackle the winch motor again!!!!!!
Still not able to fix any part or doing any more for it so we put it back together and went and had another coffee. Looks like I was going to get a quick lesson in clutch controls!!!
Friday night relaxes, I had a couple of G&T’s I needed them. No sun was setting through the grey skies but there was a stillness falling along the creek as darkness came.
Posted by Nautical Nancy at 14:57