Tuesday 18th June 2013
Boab Trees at Ivy Cove on Glauert Island in the Coronation Islands and Careening Bay Port Nelson
From our uncomfortable anchorage in York Sound (maybe we should have anchored on the other side where another cat and a schooner had anchored. (sure sign? der!) MrJ and I motor sailed AR around the corner through the Anderson Islands. We were heading for another place, an anchorage on the northern side of the head of the Prince Frederick Harbour where we had been told about some more crystals. To get to this special place we were negotiating our way through a few narrow channels between the islands until there was a sudden drop in the depths. Not liking this shallowness (meaning possible reefs) and the southerly winds had kicked up the sea which meant even if we had been able to get through the shallows AR would have been on a lee shore anchorage. No thanks! 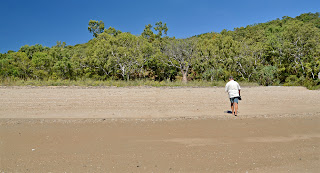 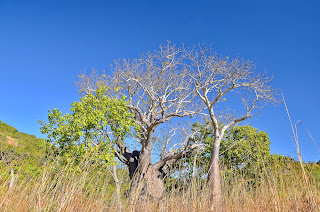 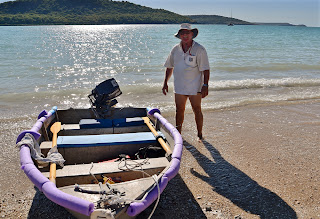 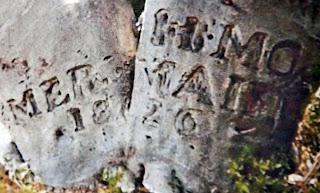 In Careening Bay Philip Parker King carved HMC Mermaid 1820 into a boab tree during his survey of Australia. It is still clearly visible about 100m up the tidal creek that enters the bay. His Britannic Majesty's Cutter Mermaid was launched in Calcutta. India on December 23, 1816. She was 84 tons, 56ft LOA, had a beam of 18ft 6in and draft of 9ft. She was built in solid teak with English cordage and sheaved with 18oz copper. Purchased by Governor Macquarie for f200 and assigned to Philip Parker King for the survey of the northwest. The Mermaid spent sixteen days at Careening Bay while repairs were carried out on the keel, stern post, rudder connections, garboards track and fastenings. Unfortunately, iron nails had been used in her building. King’s tree is now overgrown with vines and the creek has no water. 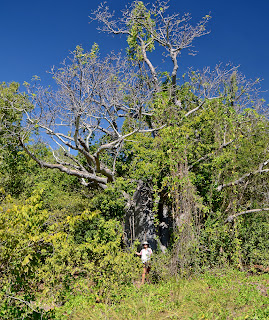 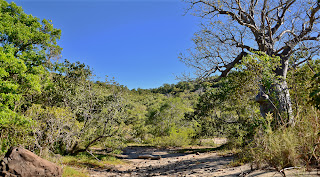 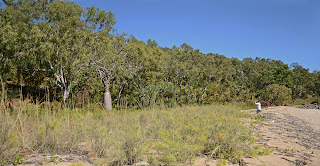 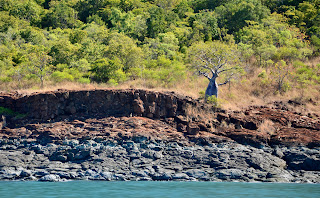 Back on board SR MrJ and I make passage for Ivy Cove on Glauert Island which is part of the Coronation Islands just north of Careening Cove. There is a deep navigable passage between Gray and Glauert Islands. We keep to the centre with a good lookout for any hidden rocks or sandbars. On the east side of this passage was the Ivy Cove anchorage (15'03.3'5 124'58'E) where it was possible to get out of the strong tidal flow and anchor in thick mud. 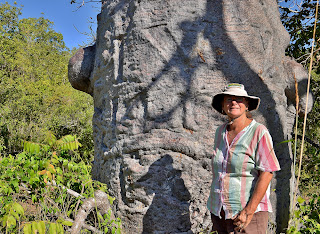 There was a beautiful sandy beach and ashore a large boab tree on which the inscription Ivy 19.10.1890 or 91 (uncertain) has been carved. Ivy was a pearling schooner working in the area under the command of Captain Biddles. 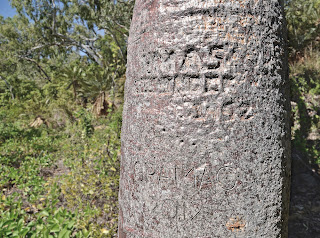 The winds had turned more to the north, NW sea breezes had settled in once again and the Ivy Cove anchorage was for SE winds and so a very sloppy sea came down the channel and into the bay causing small wavelets across the bay making AR do her rocking act. MrJ and I had decided to get out in the tinny for a spot of fishing along the thing mangrove shoreline. This turned out not to be such a good idea with sloppy water and getting back on board was a bit of a trial too with AR rocking and bobbing one way and the tinny bouncing all over the place. Reminded me of when we were in Hiva Oa or Balboa in Panama. No fun at all! 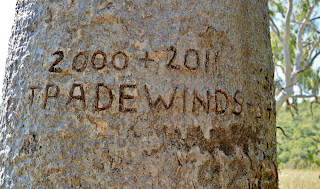 However while in Ivy Cove we did not see the reported resident crocodile that had been blamed for chewing an inflatable dinghy that had been left tied astern. And another bit of useful or useless information about this area - The nuts from the Cycad trees are poisonous. Just so as you know that now!