Thursday 28th June 2012
Went Kayaking around Sawmill Bay – Cid Harbour
20'15.818 S - 148'56.570 E
The sun was shining its warmth this day; taking both cameras with me I jumped in the kayak and went exploring around the shoreline of Sawmill Bay Cid Harbour. Over at the main beach I was able to get off the kayak to see what was around. I was the only person on the beach at this stage, until an hour or so later when several people came ashore in their dinghies from the larger motor boats that had just arrived in the bay.

The main walking track that takes you up to the Whitsunday Peak was still much the same, a lovely natural rainforest trail.

The water stream that drains out onto the beach had changed. It had been deepened by last season’s rains washing down the hills and out into the sea.

The sandbank along the beach had changed it course where this little stream comes out and there are now a couple of large water holes in the sand where the stream once trickled.

The second walking track across to Dugong Beach had not changed with its entrance into the rain forest surrounded with rocks and natural bush. The once used metal tracks of the long ago old sawmill are still buried deep in the sands. 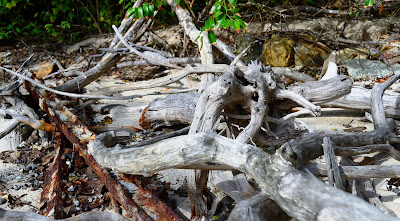 Sawmill Beach acquired its name because from 1888 to 1904 the Withnall family operated a saw mill there and in the 1990s remnants of that occupation still could be found, though fast disappearing. During the Depression of the 1930s under a scheme to place certain unemployed persons in an area where they could fend for themselves the Department of Labour and Industry, Brisbane in November 1931 approved an informal tenure over an area of 200 acres in the Sawmill Beach area of Cid Harbour, and Alexander Burnett, William Charles Fisher, Harold Robertson and George Henry Gray were permitted to occupy the area free of rent. They had the right to cultivate ten acres of the leased land but whether this occupation took place is not known.