It Is Now The End of April


MrJ and I are still in the Bayview Marina in Darwin and a couple of weeks away from our next passage. During our stay in Bayview we have met some great people and made some good friendships, seen some wonderful place and have experience the true spirit of Darwin. I do love the place and would think about coming back again or even to live except for the horrific expense of everything especial the cost of accommodation. Housing and rental have gone through the roof and are still climbing; climbing way beyond our means. And no, I would not be doing another wet season in the marina in the boat in Darwin. 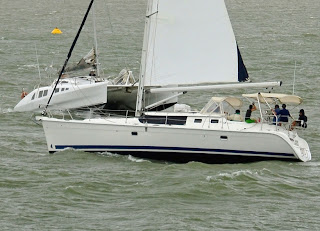 March and April 2013 have been the months for mucking about in boats, on boats or with boats.
Sunday the March 3rd found MrJ and me at Stokes Hill Wharf on a very grey wet and windy day. It was one of the Wet Season Yacht Race Days with only the brave out to play. Many of the yachts were having a great time with the lively conditions.

That week the Queen Victoria can into port and tied up alongside the cruise-ship wharf. This huge ship dwarfed everything. 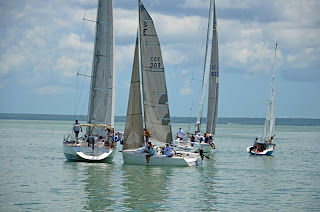 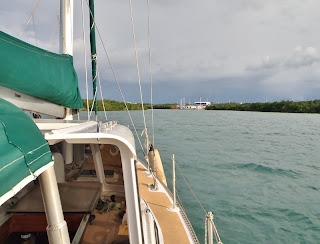 April 2nd it was back to Scott On Marine crewing on Jirakati a 55mt motor/houseboat.


It is autumn in Australia but you would not know this in Darwin - still 32 - 34 degrees during the day and 25 overnight. The wet season was a non happening thing; the dries wet for a long time. Having said that the clouds are building outside as I am writing and we did have a quick shower last night but that seems to be all that we are going to get.
I have been out and about with the camera as you would expect; mostly just playing around with photos for my internet challenge topics. 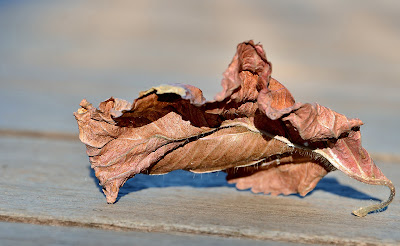 For the topic vanishing point I did a quick photo of the marina boardwalk. I could not get away anywhere for a few days, kept busy with preparation work for leaving soon. The photo was not the most interesting of subjects, an empty boardwalk, but it was the only place nearby with enough of that long, far-away feel to create a vanishing point in the image. The leaf is the only thing that I can see moving along the boardwalk/walkway. This leaf has dried off and died to fall from its place in the tree, to fall onto the walkway, to be scorched by the still hot sun and pushed along by the gentle afternoon sea breeze. The only hint that autumn is in the air. 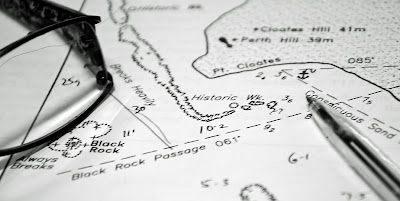 I'm chart book making. This keeps me stuck inside doing heaps of paperwork for our next passage, and I thought I had left part-time office work behind ;o)))))
I have typed, coped and pasted, printed enough information on maps, charts Google earth photos and tide tables to fill three folders - this is just part of the preparation work that is done before each time we sail out into unknown waters - I like to have hard copies of everything and not to relying on chart plotters and the computer.
Another interesting project both MrJ and I are working on is to hook up a portable depth sounder to one of the dinghies when transversing some of the dangerous shallows and sand bars of the river entrances and streams throughout the Kimberley’s.
I may have mentioned before that we did manage to purchase a small tinny with a  2.5h Mercury motor and MrJ did get to make some new cabling for the connections between the HF radio, HF modem and my computer for us to be able to send and/or receive TEXT email messages only. We are still testing the system; all seems to be working ok but we have not managed to connect to a HF station to be able to send the test email. I will keep at this!
I didn’t get all the sewing done that I would have liked to. The poor old Brother sewing machine went on strike and I had only managed to get one hatch cover done. It is still too hot for working outside with the big noisy Sailrite machine. 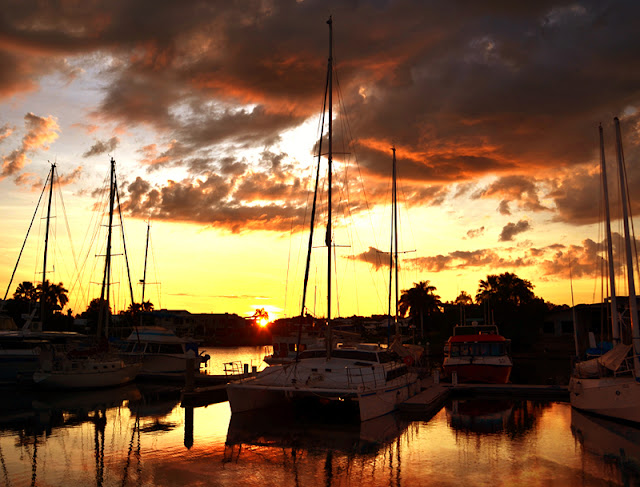 When I need a break from the working day the relief is only a step away, to step outside, on deck or while in the marina, on the pontoon walkway to watch the setting sun, this time going down behind the other boats - it will not be long before I am out there again to watch the sun rising and setting across the great wide land and sea. 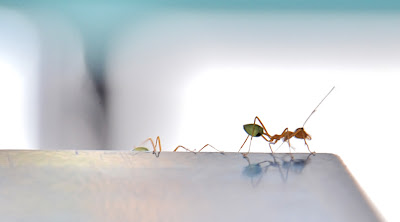 or go for a walk around to the Duck Pond Park. 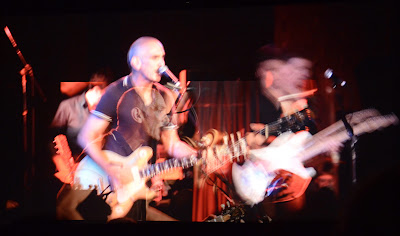 With friends, last Wednesday evening MrJ and I went to the Darwin Dry Season opening night of the Darwin Deck Chair Theatre. Stories of Me, a documentary on the life of Paul Kelly, one of Australia’s most gifted and beloved singer/song writers, was being shown on the big outdoor screen. Yes I did recline in one of the deckchairs but ended up with stiff back and hips by the end of the evening. The next time this old body will take to one of the plastic chairs.The film was brilliant documentary; charting the remarkable life of this talented story tellers. For nearly forty years Kelly wrote over 350 songs mapping out the Australian landscape and its people. A lot of Kelly’s most popular songs and some unknown songs to me were included in the film. The man behind the music and words was revealed in candid conversation throughout the film.
I just loved it..............!
And then there was Barbara’s birthday at the Trailer Boat Club at Fannie Bay. Barbara and Ron in Opal Shell have done 30 years as a tourist boat in the Kimberley's. MrJ and I have received some very good information and great advice from them.

And of course, today is ANZAC DAY – but that will have to wait till the next Blog post.