Sunday 19th August 2012
Anchored in Line Reef
19’43.586S 149’10.693E
Cool nights, warm sunny days
MrJ and I have been anchored in Line Reef with the closest other boat being some 6n/m away at Bait Reef. We were all alone!
Friday 17th – We had another lazy morning and not due to any hangover or illness only because we can. It maybe a Friday to most people but to us every day is a Sunday! MrJ and I were out of bed at the usual hour, just before sun-up, sat around with a cup of tea to watch the sunrise, played on the computers for a sometime while we had a leisurely breakfast and another cup of tea. Or was that two or three more cups of tea?
﻿


﻿﻿﻿
﻿﻿﻿
It was then that we decided to sail out to the reef; the weather was kind and the seas were calm so off we went. Just as we were motoring out the Southern Passage between Hook and Hayman Islands a whale was coming in. We slowed but the whale went down. MrJ and I put up the main and genoa once we had come out of the passage and had passed a couple of other cats, one being friends in San Souci, and then up popped a couple of more whales. It was a mother and calf this time, right in close to the top end of Hayman Island and heading straight for San Souci. They saw the whales and stopped to watch and let them pass. What a treat!


﻿﻿
MrJ and I kept going, heading for the reefs, Bait, Barb, Hook, Hardy’s and Line Reefs. We were heading for the anchorage at Line Reef which is 30n/m out from the top of Hook Island. Most boats head for Bait Reef for pristine diving on excellent drop-offs and they can take one of the few mooring buoys. As MrJ and I do not dive we leave this special place for others that do and go to where the bottom is shallow enough for us to anchor without damaging the reef. The big tourist’s boats, the Wave Breaker and such, head for inside Hardy’s Reef where there are commercial dive platforms, a helipad and overnight accommodation. All geared up for the paying tourists!
There isn’t much wind so we are motor sailing out to the reef and on our way out MrJ and I see more whales, mothers and calves, playing and splashing in the shipping channel. There are five boats moored up on Bait reef and another one waiting just out to sea. As we bring AR around the southern side of Bait Reef and in the passage between Bait and Barb Reef we encounter more whales playing and splashing along the fringe of Bait Reef. MrJ stops the boat while we watch the antics. We dare not go in closer for a better look for fear of scaring the whales or more so of hitting the reef. What a fabulous display the mother and calf put on!
It was one hour after mid-day when MrJ brought AR through the coral scattered waters off Line Reef with me standing up on the saloon roof being forward spotted for bombies.  The “good book” and the chart plotters show the depths in metres, anything from 2 – 5mts at datum, the paper chart is in fathoms showing anything from 2 – 5fathoms at datum. We were slowly moving in waters of 12 – 9.5mtrs and anchored in about 9mts of water two hours before low tide. Now if my calculations are right: 9mtrs divided by 1.9 = 4.73fathoms, so maybe the guide book and the chart plotters are WRONG. It would not be the first time!
It does take a couple of goes to set our wonderful Rocna anchor, no fault of the anchor, just us trying to find the sand patches and not the coral rubble. I am not happy unless the anchor is holding fast in goo firm ground. The first thing MrJ and I did once we were settled into our anchorage was to drop the dinghy to take a look over the reef as the tide was receding exposing parts here and there.
The water was not as still as we would have liked due to tide and a slight breeze so we had to contend with a faster drift over the coral then first intended, but I did get to see some of the beautiful sights of small fishes and coloured coral.

Back on board AR MrJ and I relaxed in the quiet of the late afternoon, watching a whale in the passage into Hardy’s Reef. Before that the Wave Breaker left the reef platform, so did a couple of helicopters and then it was quiet again. 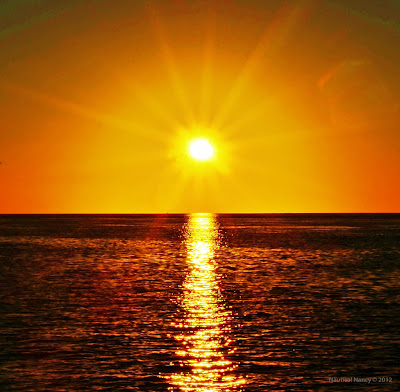 Just me and MrJ, the whales and the sunset over an empty sea!


Saturday 18th – The night at Lines Reef was pleasant enough to sleep with a blanket on and no doona and to wake, feeling refreshed, before dawn to a brilliant sunrise with only us and the birds to see and enjoy. As the golden glow of the sun rose over an empty sea, the warm rays began to heat up the morning.

With the coming of the morning came a couple of fishing boats heading for the outer reef and once more the whales, playing and splashing in the morning light.


It was one of those nothing kinda days where you just seem to while the hours away with doing nothing. No not really; I think I spent most of my morning, after a late breakfast, playing with photo editing and writing notes. Amazing how much time this takes up and before you know it half the day is gone. So what do you do next? Well take a nana nap on the bow deck of course!
While lazing up on the bow deck I could see out over the brilliant still water for what seemed like miles and miles; just miles and miles of nothing, nothing but still calm sea, bold blue sky, the occasional bird but not a whale in sight. Maybe they have started their trek south, back to the cold lands of the Antarctica.
In the late afternoon MrJ and I lazed around in the cockpit reading our books while watching the day come to a close across a still sea and a golden sunset with streak smoke haze across patchy sky.

Sunday 19th August 2012
I woke up to a cloudy sunrise and whales in the distance. Maybe it was the ones from Saturday or maybe it was new whales travelling south through the reef.
﻿ 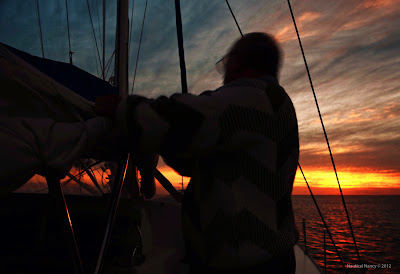 MrJ rolled the covers, prepared AR for our sail across to Gloucester Island some 50n/m to the SW and then had a cooked breakfast before we set off.


As I pulled up the anchor there was a large rock with live coral attached, caught on the  good old Rocna anchor. I had to get MrJ to dislodge it before we could set off. Maybe there should be acouple of mooring buoys at Line Reef too.


MrJ motored slowly back out of Line Reef across the coral and sand patches. He followed the path that we came in on just to be sure of no bombies or shallow surprises. Once clear of the reef we set the sail and were on our way; on our way to Gloucester Passage, the last of our anchorages in the Whitsunday Islands.
Posted by Nautical Nancy at 12:25